Apples and Butterflies is a gentle, lyrical poem about a family’s autumn vacation that shows Prince Edward Island in a light we don’t often see—the “bright blue and orange light” of fall. Tamara Thiébaux-Heikalo’s rich and wild illustrations build a narrative with the text, depicting the family beachcombing, flying kites and picking apples. 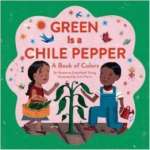 Children discover a world of colors all around them: red is spices and swirling skirts, yellow is masa, tortillas, and sweet corn cake. Many of the featured objects are Latino in origin, and all are universal in appeal. With rich, boisterous illustrations, a fun-to-read rhyming text, and an informative glossary, this playful concept book will reinforce the colors found in every child’s day.

After the bloody deaths of his parents, Finn Maguire is determined to make a fresh start, running a boxing gym but when loan sharks target his business partner and his lawyer vanishes with his money, Finn is dragged into London’s underworld again, with only his fists and wits to keep him alive.

Four young dinosaurs are warned about the scary Gigantosaurus, so one of them volunteers to keep watch for the others while they play.

The barnyard animals on Old MacDonald’s and Senor Pancho’s farms have a hard time communicating. MacDonald’s rooster says cock-a-doodle-doo! While Senor Pancho’s gallo says quiquirquí. The English-speaking chick says peep, peep, but el pollito says pio, pio. Then the cow says moo and la vaca says mu! Maybe they’re not so different after all! So all the animals come together for a barnyard fiesta, because dancing is a universal language.

Presents a humorous introduction to Spanish words through illustrations and rhyming text.

The creator of Happy and Friends illustrates some of childhood’s most beloved songs from “Twinkle Twinkle Little Star” to “The Teddy Bear’s Picnic,” and from “I’m a Little Teapot” to “The Wheels on the Bus” in this book and CD set.

“Hickory, dickory, dare, Dogs aren’t allowed in there. A sneaky peek through . . . Then a hullabaloo! Hickory, dickory, dare.” Zack and his dog, Rufus, are best friends. So when Zack goes to school, Rufus follows along. And once he’s there, Rufus joins right in with painting, lunchtime, and even garden time — which makes for one messy pup when it’s time to go home! Engaging illustrations capture the people and playthings of a child’s day, with an array of analog clocks sprinkled throughout for good measure.

Watch a tiny seed grow through the seasons into a fine pear tree with this beautifully-presented book.