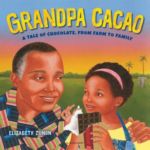 As a little girl and her father work together to make her birthday cake, he tells the story of her Grandpa Cacao, a farmer from the Ivory Coast. Includes author’s note and a cake recipe.

The original volume of Aya debuted to much critical acclaim, receiving a Quill Award nomination and praise for its accessibility and for the rare portrait of a warm and vibrant Africa it presented. This continuation of the story returns to Africa’s Ivory Coast in the late 1970s, where life in Yop City is as dramatic as ever. The original cast of characters is back in full force, with a case of questionable paternity fanning the flames of activity in the community. The new mother Adjoua has her friends to help with the baby, perhaps employing Aya a bit too frequently, while a new romance leaves Bintou with little time for her friends, let alone their responsibilities. The young women aren’t the only residents of Yopougon involved in the excitement, however; Aya’s father is caught in the midst of his own trysts and his employer’s declining Solibra beer sales, and Adjoua’s brother finds his share of the city’s nightlife.

In this Ivory Coast legend, Api and her family are repaid for their kindness to a stranger with a mysterious warning to leave their village and go to the other side of the river Amman.