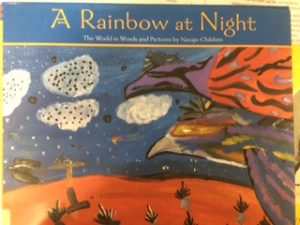 A Rainbow at Night is a lively collection of art by Navajo children. Through these imaginative paintings and drawings, readers will learn about some of the special traditions of Navajo life while discovering the universality shared by children of all backgrounds. The images are accompanied by photographic portraits of the artists and personal descriptions of their work.

Collection of twenty poems accompanied by full color paintings of mountains, plateaus, deserts, and wildlife from the American Southwest and of the Native people who live there. Book begins with spiritual elements, moves on to told stories, Begay’s memories, members of the community, and rituals, and ends with hope for an early spring. Throughout there is a sense of striving to balance the old ways and beliefs with the intrusive outer world and to protect the Earth, which is regarded as sacred.

This story reveals the life of a Yavapai-Apache boy named Wassaja, who was kidnapped from his tribe and sold as a slave. Adopted and renamed Carlos Montezuma, the young boy traveled throughout the Old West, bearing witness to the poor treatment of American Indians. Carlos eventually became a doctor and leader for his people.

A little mouse prepares to rid the Mishongnovi people of a hawk that has been killing their chickens.

The annual seasons and rhythms of the desert are a dance of clouds, wind, rain, and flood—water in it roles from bringer of food to destroyer of life. The critical importance of weather and climate to native desert peoples is reflected with grace and power in this personal collection of poems, the first written creative work by an individual in O’odham and a landmark in Native American literature.

Malotki & Lacapa, who previously collaborated on THE MOUSE COUPLE, bring this magical HOPI FOLKTALE to life, telling how two children left behind in the drought stricken village of Oraibi, through their creativity & playfulness, influence Muy’ingwa, the god of fertility, to return the land to fruitfulness. EKKEHART MALOTKI, professor of languages at Northern Arizona University, has spent many years working on the preservation of the Hopi language & culture. MICHAEL LACAPA has previously illustrated four children’s books, three of which he also authored. Of APACHE, HOPI & TEWA descent, he has gained inspiration from traditional storytellers & the traditional designs & patterns found in SOUTHWEST basketry & pottery. His illustrations for THE MAGIC HUMMINGBIRD convey the range of experience typical of life in the Hopi mesas, from the dullness of the parched earth to the brilliance of the multicolored corn & the magical hummingbird who delivers the children’s prayers for renewal. THE MAGIC HUMMINGBIRD $15.95 (cloth) plus $3,00 s/h. Order from Kiva Publishing, 102 E. Water St., Santa Fe, NM 87501 (505/820-7413).

Details a day in the life of an Arizona girl of Hopi descent, looking at her family, the history of her tribe, and some traditional ceremonies and customs that are still observed today.

La Llorona (yoh-RROH-nah), now available for the first time in a full-color paperback, is the ghost story to end all ghost stories and truly the most popular cuento of Hispanic America. This story of the weeping woman appears at first to be only a frightening tale filled with mysterious events which cause children to sit wide-eyed. Yet it’s the simple, universal wisdom at the core of the story that finally works its magic into their hearts. Joe Hayes is best known for his bilingual tellings of stories from the American Southwest. La Llorona is one of his favorite stories. 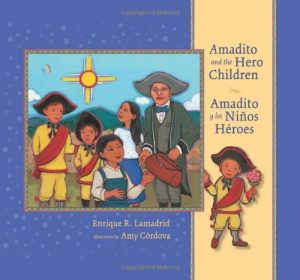 A brief fictional recounting of legendary epidemics that struck the American Southwest–the smallpox epidemics of the eighteenth and nineteenth centuries and the influenza epidemic during World War I–which ravaged many rural communities throughout the West. Includes author’s notes about the characters.