It’s monsoon season in Bangladesh, which means Iqbal’s mother must cook the family’s meals indoors, over an open fire. The smoke from the fire makes breathing difficult for his mother and baby sister, and it’s even making them sick. Hearing them coughing at night worries Iqbal. So when he learns that his school’s upcoming science fair has the theme of sustainability, Iqbal comes up with the perfect idea for his entry: he’ll design a stove that doesn’t produce smoke! With help from his teacher, Iqbal learns all about solar energy cooking, which uses heat from the sun to cook.

“A biography of Nobel Peace Prize winner Muhammad Yunus, who from a young age was determined to make difference in the world and eventually revolutionized global antipoverty efforts by developing the innovative economic concept of micro-lending. Includes an afterword and author’s sources.”

Join the discussion of Twenty-Two Cents as well as other books centered around relocation on our My Take/Your Take page.

A young Bangladeshi girl who helps support her family by working in a brickyard finds a way to make her dream of going to school and learning to read a reality.

Nadira and her family are undocumented, fleeing to the Canadian border as they run from the country they thought was their home. For years since emigrating from Bangladesh, they have lived on expired visas in New York City, hoping they could someday realize their dream of becoming legal citizens. But after 9/11, everything changes. Suddenly, being Muslim means being dangerous, a suspected terrorist. And when Nadira’s father is arrested and detained at the border, Nadira and her older sister, Aisha, are sent back to Queens and told to carry on, as if everything is the same. Nadira and Aisha live in fear they’ll have to return to a Bangladesh they hardly know. Aisha, always the responsible one, falls apart. It’s up to Nadira to find a way to bring her family back together again. Critically acclaimed author Marina Budhos has written a searing portrait of contemporary America in the days of terrorism, orange alerts, and the Patriot Act, and a moving and important story about something most people take for granted — citizenship and acceptance in their country. 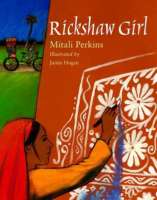 In her Bangladesh village, ten-year-old Naimi excels at painting designs called alpanas, but to help her impoverished family financially she would have to be a boy or disguise herself as one. Bangladesh is a country in South Asia surrounded by India.