Ali and his fiancée Zeynep dream about leaving their home in Anatolia and building a new life together in Canada. But their homeland is controlled by the Turkish government, which is on the brink of war with Britain and Russia. And although Ali finds passage to Canada to work, he is forced to leave Zeynep behind until he can earn enough to bring her out to join him. When the First World War breaks out and Canada joins Britain, Ali is declared an enemy alien.

Join the discussion of Dance of the Banished as well as other books centered around relocation on our My Take/Your Take page.

The story about childhood, about two girls who are friends, Наре and Манюне, and their terrible and kind grandmother Manjuni and all of their relatives.

It is 1914, and the Ottoman Empire is crumbling into violence. Beyond Anatolia, in the Armenian Highlands, Shahen Donabedian dreams of going to New York. Sosi, his twin sister, never wants to leave her home, especially now that she is in love. At first, only Papa, who counts Turks and Kurds among his closest friends, stands in Shahen’s way. But when the Ottoman pashas set in motion their plans to eliminate all Armenians, neither twin has a choice. After a horrifying attack leaves them orphaned, they flee into the mountains, carrying their little sister, Mariam. But the children are not alone. An eagle watches over them as they run at night and hide each day, making their way across mountain ridges and rivers red with blood.

A sparrow receives kindness from strangers and repays each act of kindness with a trick to get more, but at last, in a surprising twist, the sparrow is back with his original problem. 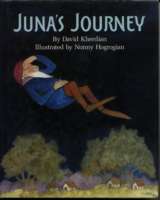 In a time and a land not so different from ours, lives a one called Juna, a dream helper who has spent much of his life dreaming for others. He has never dreamed for himself, until one evening when he has a dream of his own, which contains a mysterious message just for him. To learn the secret of it, it is clear he must go on a journey. But a journey to where? And for what? In search of the answers, Juna starts on his way, meeting some surprising helpers who join him on his quest. Traveling as a team they move toward a destination fraught with suspense, enchantment, mystery and promise of a new future for the people of earth.

In order to win the hand of his love, indolent Prince Haig learns to weave beautiful golden cloth, a craft that later saves his life.

When a thirsty fox steals some milk from an old farm woman, it sets off a chain reaction young readers will delight in following. Based on a favorite Armenian folktale, this briskly told cumulative story was awarded the Caldecott Medal for the most distinguished picture book of 1971.