Describes the culture and plight of the Waorani, an indigenous tribe of the Ecuadoran rain forest whose environment and way of life are threatened by the encroachment of the industrial world.

Alonso, a dirt-poor teenager living in Peru, helps out at the public health clinic his mother, Magdalena, opened, so that he can see Rosa, the beautiful and wealthy daughter of the clinic’s doctor. Alonso and Rosa are both shattered when Magdalena is assassinated by a revolutionary terrorist organization. Left with no hope, Alonso might be seduced into becoming a guerrilla in the same organization that killed his mother. Rosa becomes disgusted with her father’s complacency and leaves wealth and safety behind to somehow help what is left of Alonso’s family. The story of how love can find its way through poverty and war.

Describes the world of the Incas and how it was changed forever when the Spanish expedition under Pizarro conquered Peru.

The hero is a simple peasant who does not like the night because it is dark. Every evening he complains to the night, who can do nothing to change its ways. Finally, the man pokes his finger through the night and makes a star. He finds the effect so wonderful that he creates many more, and even uses his fist to punch a hole large enough to be the moon. To celebrate the lightness of the night, the whole town turns out for a nighttime celebration.

The story describes the first time young Waira joins her parents on their trip from their mountain home to the market in Topojo. The journey normally takes two days, but in order to give Waira, and readers, a glimpse of Aymara history, the family takes a long detour to the ruins of the ancient city of Tiwanaku. They also stop near Lake Titicaca before finally arriving at the market. All of these events give Topooco the opportunity to describe some of the customs, history, lifestyle, and folklore of the people.

The winner of the 1992 Nobel Peace Prize, Rigoberta Menchu is a poor, uneducated Mayan woman who has helped her native people fight oppression in Guatemala and who has told the world about their suffering. Part of the Rainbow Biography series, the account is quiet, but it tells of violence and poverty and amazing courage. Beginning with Menchu’s childhood as a field laborer, her personal story is woven together with that of her Indian people and their harsh dislocation at the hands of the landowners and the brutal army. Her father was imprisoned, tortured, and finally murdered for his leadership role in the resistance; so were her mother and her brothers and sisters. Yet, like her father, she has led her people in nonviolent resistance and has given them a voice.

This book begin with historical overview of Nicaragua, including the reasons for recent political unrest. The first-person narratives of young refugees follow. All of the teens tell why they left their native countries, how they made their journeys, their experiences and difficulties in North America, and if they plan to return to their homelands. The introductions state that the young people were interviewed; it is unclear exactly when these conversations took place. In any case, the writing is choppy and fails to convey the urgency of the plight of refugees fleeing oppressors. 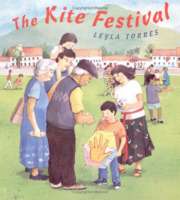 One Sunday morning, Fernando Flórez, his parents, grandparents, and sister head to a random destination for an outing — San Vicente. When they arrive in the center of town, they see many people preparing for a kite festival. The Flórez family waste no time joining in the fun. Unfortunately, all the stores are closed, so buying a kite’s out. But by using their ingenuity — along with found objects — they successfully put one together. Although they encounter some challenges along the way, they can always find a solution with a little thinking. A surprise comes at the end of the day, with the mayor of San Vicente on hand to deliver it.A warm family story set at a festival much like one Leyla Torres attended as a child in her native country of Colombia.

For the past three decades, Pleasant DeSpain has explored Latin America,_its countries, countrysides, customs, cultures, and especially, its stories. While his repertoire of traditional world folktales includes narratives from almost every culture around the globe, DeSpain’s talent shines even brighter when relating the legends from Latin America. His exploration of the heart and soul of this enormous region demonstrates his passion for Latin America and its people and their stories. 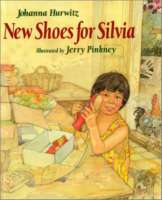 Silvia can’t wait to try on her present from Tia Rosita: new shoes as red as the inside of a watermelon. The shoes are too big for Silvia to wear, and she waits for her feet to grow. The excitement of the new shoes and the formidable task of waiting to grow into them are both conveyed beautifully through the story and the art.