Sonia’s entire village believes she has a gift, but it’s only in leaving home that she finds out who she truly is. A compelling tale from a rich new voice in young adult fiction.Sixteen-year-old Sonia Ocampo was born on the night of the worst storm Tres Montes had ever seen. And when the winds mercifully stopped, an unshakable belief in the girl’s protective powers began. All her life, Sonia has been asked to pray for sick mothers or missing sons, as worried parents and friends press silver milagros in her hands. Sonia knows she has no special powers, but how can she disappoint those who look to her for solace? Still, her conscience is heavy, so when she gets a chance to travel to the city and work in the home of a wealthy woman, she seizes it. At first, Sonia feels freedom in being treated like all the other girls. But when news arrives that her beloved brother has disappeared while looking for work, she learns to her sorrow that she can never truly leave the past or her family behind. With deeply realized characters, a keen sense of place, a hint of magical realism, and a flush of young romance, Meg Medina tells the tale of a strongwilled, warmhearted girl who dares to face life’s harsh truths as she finds her real power.

Travel from the ancient hidden city of Machu Picchu high in the Andes, past Mayan ruins over 2,000 years old, to the bustling modern cities of Sao Paulo and Buenos Aires. Along the way, readers will learn about the vibrant cultures and innovations of Latin Americans–rodeo, carnival, chocolate, coffee, piñata, tango, and salsa, to name only a few. Many of these have become part of the daily lives of people all around the world.

Auki, a young member of the Tehuelche tribe in Patagonia, wants to prove himself as a hunter but when he sets out on his own to face the puma, he stumbles upon a sacred cave and its guardian.

A young chief who had been protected by a hummingbird is killed by his jealous uncle and then transformed into a quetzal, symbol of freedom.

Roses for Isabella invites us to experience life in Ecuador through the eyes of a young girl who keeps a journal and loves to write.  We learn about Isabella’s parents who work on one of the hundreds of farms growing beautiful roses that are sold all over the world.  But not all of these farms are fair to worker and kind to the earth.  Through Isabella, we learn how her family’s life changes for the better when her parents find work at a Fair Trade farm.

Montana-born Rex loves nothing more than to take his kayak out on a river, the faster and more powerful the better. When he gets the opportunity to tackle the well-named El Furioso in southwest Colombia, he is thrilled. He anticipates the river’s challenges, but finds himself in a situation where the real danger is human. In Colombia, he meets Myriam Calambás, an Indígena, who has lived along the El Furioso all her life. Though she loves its rushing waters, she dreams of leaving to get an education so that she can help her people. Her dreams, and her very survival, are in the balance when she and Rex are caught up in the clash between paramilitaries, working for rich landowners, and guerillas, who are supposed to be protecting the poor. 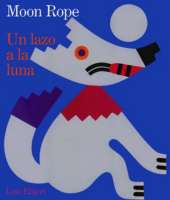 An adaptation of the Peruvian folktale in which Fox and Mole try to climb to the moon on a rope woven of grass.

While big changes are coming to her Mexican village, nine-year-old Rosalba hears that the Mayan calendar predicts the end of the world in 2012 and she dreams of an ancient Mayan boy, eyes bound in a shamanistic ritual, who hints at what Rosalba can do.