In 1982, twelve-year-old Reza has no interest in joining Iran’s war effort against Iraq. But in the wake of a tragedy and at his mother’s urging, he decides to enlist, assured by the authorities that he will achieve paradise should he die in service to his country. War does not bring the glory the boys of Iran have been promised, and Reza soon finds himself held in a prisoner-of-war camp in Iraq, where the guards not only threaten violence―they act upon it. Will Reza make it out alive? And if he does, will he even have a home to return to? Friendship, heartbreak, and Reza’s very survival are at stake as he finds solace through music and forges his own path―wherever that might take him. 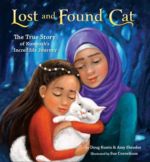 When an Iraqi family is forced to flee their home, they can’t bear to leave their beloved cat, Kunkush, behind. So they carry him with them from Iraq to Greece, keeping their secret passenger hidden away. But during the crowded boat crossing to Greece, his carrier breaks and the frightened cat runs from the chaos. In one moment, he is gone. After an unsuccessful search, his family has to continue their journey, leaving brokenhearted. A few days later, aid workers in Greece find the lost cat. Knowing how much his family has sacrificed already, they are desperate to reunite them with the cat they love so much. A worldwide community comes together to spread the word on the Internet and in the news media, and after several months the impossible happens—Kunkush’s family is found, and they finally get their happy ending in their new home.

As American bombs fall on Baghdad during the Iraq War, ten-year-old cousins Nouri and Talib witness the growing violence between Sunni and Shiite Muslims.

Shortly after Cass’s big brother is deployed to fight in Iraq, Cass becomes pen pals with an Iraqi girl who opens up her eyes to the effects of war.

After his home was invaded by Saddam Hussein’s soldiers, a young Kurdish boy named Mohammed and his mother take on a daring quest to flee Iraq; risking their lives to travel through several countries in order to reach freedom in England.

Provides interviews with twenty young Iraqi children who have moved away from their homeland and tells of their fears, challenges, and struggles to rebuild their lives in foreign lands as refugees of war.

A graphic novel looks at life on the streets of Baghdad during the Iraq War, inspired by true events. In the spring of 2003, a pride of lions escaped from the Baghdad Zoo during an American bombing raid. Lost and confused, hungry but finally free, the four lions roamed the decimated streets in a desperate struggle for their lives. Pride of Baghdad raises questions about the true meaning of liberation – can it be given, or is it earned only through self-determination and sacrifice? And in the end, is it truly better to die free than to live life in captivity?

The inspiring story of an Iraqi librarian’s courageous fight to save books from the Basra Central Library before it was destroyed in the war.It is 2003 and Alia Muhammad Baker, the chief librarian of the Central Library in Basra, Iraq, has grown worried given the increased likelihood of war in her country. Determined to preserve the irreplacable records of the culture and history of the land on which she lives from the destruction of the war, Alia undertakes a courageous and extremely dangerous task of spiriting away 30,000 books from the library to a safe place.Told in dramatic graphic-novel panels by acclaimed cartoonist Mark Alan Stamaty, Alia’s Mission celebrates the importance of books and the freedom to read, while examining the impact of war on a country and its people.From the Hardcover edition.

This book has been a featured book in our Middle East and South Asia Arabic Language and Culture Kit.

Sindbad the Sailor has escaped death many times and is planning to live the rest of his life on dry land. But the sea beckons, and he sets out for one final adventure. As he sails from a beautiful far-off land where people drink scented tea, a storm destroys the ship. Sindbad finds refuge on an island, but it holds little safety for him. Ivory traders make him their slave. It seems that he will live out his days in servitude. But the power of love, and his compassion for a baby elephant, give him the strength he needs for survival. His voyage offers him the answer to life’s greatest secret, and finally he can rest.