When the beloved president visited Ireland in 1963, he described it as the best four days of his life. And for a generation of Irish people, it was a trip they never forgot. This warmly told, bighearted picture book captures the fevered excitement in the buildup to the president’s visit, all seen through the eyes of a young boy named Patrick who wants to know more than anything what it would feel like to shake the president’s hand. 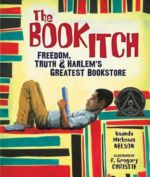 A “documentary comic book” from 1931, depicting the true adventures of four young Japanese men in America. 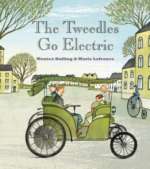 Meet the Tweedles: Papa, Mama, daughter Frances and her brother, Francis. It’s the dawn of a new century—the twentieth century!—and the Tweedles have decided to buy a car. But no gas-guzzler for this modern family. Only an electric car will do for them. Frances is the only member of her eccentric family who is not delighted when Papa decides they need an electric car. She would rather read a book. Frances knows that cars go fast, which can only lead to trouble. She is even less impressed when the family takes possession of the car and faces ridicule from more conventional citizens with their noisy, dirty, gas-fueled machines. But when Mr. Hamm is unable to get to the hospital because his car has run out of gas, Frances saves the day—and falls in love with automobile travel at the same time. With humorous allusions to the twenty-first century—which is better? Gas or electric?

Joseph’s grandpa could do almost anything with his hands. He could play the piano, throw a curveball, and tie a triple bowline knot in three seconds flat. But in the 1950s and 60s, he could not bake bread at the Wonder Bread factory. Factory bosses said white people would not want to eat bread touched by the hands of the African Americans who worked there. In this powerful intergenerational story, Joseph learns that people joined their hands together to fight discrimination so that one day, their hands Joseph’s hands could do anything at all in this whole wide world.

Hazel Louise Mull-Dare has a good life, but it’s so dull. With an adoring father who grants her every wish, a place in the Kensington School for the Daughters of Gentlemen, and no pressure to excel in anything whatsoever, her future looks primly predictable.But on the day of the Epsom Derby — June 4, 1913 — everything changes. A woman in a dark coat steps in front of the king’s horse, in protest at the injustice of denying women the vote. She dies days later, bringing further attention to the suffragist cause. Young Hazel is transfixed. And when her bold new friend Gloria convinces her to take on the cause, Hazel gets her first taste of rebellion.But doing so leads her into greater trouble than she could have ever imagined. Such great trouble that she is banished from London, all the way to where her family fortune originates — a sugar plantation in the Caribbean. There Hazel is forced to confront the dark secrets of her family — secrets that have festered, and a shame that lingers on.

A girl’s imagination transports polio-afflicted kids into a fantastic world.The spring of 1955 tests Laurie Valentine’s gifts as a storyteller. After her friend Dickie contracts polio and finds himself confined to an iron lung, Laurie visits him in the hospital. There she meets Carolyn and Chip, two other kids trapped inside the breathing machines. Laurie’s first impulse is to flee, but Dickie begs her to tell them a story. And so Laurie begins her tale of Collosso, a rampaging giant, and Jimmy, a tiny boy whose destiny is to become a slayer of giants.As Laurie embellishes her tale with gnomes, unicorns, gryphons, and other fanciful creatures, Dickie comes to believe that he is a character in her story. Little by little Carolyn, Chip, and other kids who come to listen, recognize counterparts as well. Laurie’s tale is so powerful that when she’s prevented from continuing it, Dickie, Carolyn, and Chip take turns as narrators. Each helps bring the story of Collosso and Jimmy to an end—changing the lives of those in the polio ward in startling ways.

A collection of ghost stories with African American themes, designed to be told during the Dark Thirty–the half hour before sunset–when ghosts seem all too believable. With an extraordinary gift for suspense, McKissack brings us ten original spine-tingling tales inspired by African-American history and the mystery of that eerie half-hour before nightfall–the dark thirty. “The atmosphere of each selection is skillfully developed and sustained to the very end. Pinkney’s stark scratchboard illustrations evoke an eerie mood, which heightens the suspense of each tale. This is a stellar collection for both public and school libraries looking for absorbing books to hook young readers. Storytellers will also find it a goldmine.”

When Esperanza and Mama are forced to flee to the bountiful region of Aguascalientes, Mexico, to a Mexican farm labor camp in California, they must adjust to a life without fancy dresses adn servants they were accustomed to on Rancho de las Rosas. Now they must confront the challenges of hard work, acceptance by their own people, and economic difficulties brought on by the Great Depression. When Mama falls ill and a strike for better working conditions threatens to uproot their new life, Esperanza must relinquish her hold on the past learn to embrace a future ripe with the riches of family and community. 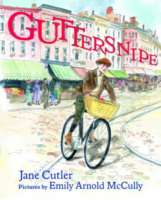