Rio Cruz and a crew of young disabled veterans are teamed up to sail around the world for charity–but when they are kidnapped by an psychotic African warlord and his band of child soldiers the trip of a lifetime turns into a nightmare journey into the African jungle. 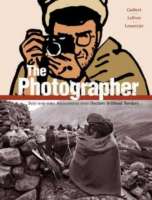 In 1986, Afghanistan was torn apart by a war with the Soviet Union. This graphic novel/photo-journal is a record of one reporter’s arduous and dangerous journey through Afghanistan, accompanying the Doctors Without Borders. Didier Lefevre’s photography, paired with the art of Emmanuel Guibert, tells the powerful story of a mission undertaken by men and women dedicated to mending the wounds of war.Didier Lefevre was a French photojournalist who traveled the world extensively, often reporting from the most remote and harrowing situations imaginable. At the end of July 1986, Didier Lefevre left Paris for Afghanistan. He barely returned to tell the tale. It was his first major assignment as a photojournalist, documenting a Doctors Without Borders mission. Camera in hand, the traveled with a band of doctors and nurses into the heart of Northern Afghanistan, where the war between the Soviet Union and the Afghan Mujahideen was raging. The mission affected Lefevre as profoundly as the war affected contemporary history. His photographs, paired with the art of Emmanuel Guibert, tell the story of an arduous journey undertaken by men and women intent on mending what others destroyed.