Shy and unsure of herself, Leila discovers all the things that make her special with the loving help of her Naani. 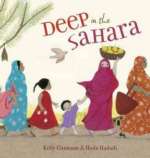 An Arab girl of the Sahara who wants to wear a malafa, the veiled dress worn by her mother and older sister, learns that the garment represents beauty, mystery, tradition, belonging, and faith.

While on a school field trip to an orchard to make cider, a young immigrant named Farah gains self-confidence when the green apple she picks perfectly complements the other students’ red apples.

Najmah, a young Afghan girl whose name means “star,” suddenly finds herself alone when her father and older brother are conscripted by the Taliban and her mother and newborn brother are killed in an air raid. An American woman, Elaine, whose Islamic name is Nusrat, is also on her own. She waits out the war in Peshawar, Pakistan, teaching refugee children under the persimmon tree in her garden while her Afghan doctor husband runs a clinic in Mazar-i-Sharif, Afghanistan. Najmah’s father had always assured her that the stars would take care of her, just as Nusrat’s husband had promised that they would tell Nusrat where he was and that he was safe. As the two look to the skies for answers, their fates entwine. Najmah, seeking refuge and hoping to find her father and brother, begins the perilous journey through the mountains to cross the border into Pakistan. And Nusrat’s persimmon-tree school awaits Najmah’s arrival. Together, they seek their way home.