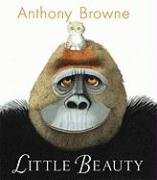 With his hyper-realistic artwork full of striking detail, the award-winning Anthony Browne tells a story of an unlikely friendship.Once there was a very special gorilla who had almost everything he needed. There was only one thing he didn’t have: a friend. With no other gorillas at the zoo, the keepers try something new. Will the gigantic ape strike a bond with another sort of creature, one as tiny and innocent as a kitten? Sparked by the story of a real gorilla who learned to sign, LITTLE BEAUTY is a celebration of a most surprising friendship.

Brind, who was raised with Sir Edmund’s pack of hunting dogs, is the huntsman of Dowe Manor. Together with his best friend, the mastiff Glaive, and the rest of the pack, he protects Sir Edmund, Lady Beatrice, and their foster daughter, Aurélie. But suddenly a tragedy strikes, one that Brind cannot prevent. In a fit of grief, Sir Edmund throws Brind, Glaive, and Aurélie—and her puppy, Gabion—out of the manor. Everywhere they turn, the vicious and lethal Black Death closely follows, as though they are bringing it with them. Can they evade this invisible enemy, as well as the angry mobs, the rogue soldiers, and the other sinister figures now threatening them? Glaive and Gabion—born to hunt, not to be hunted—may be their only chance for survival. Plague-bringers or not, Brind and Aurélie will never stop fighting to keep themselves—and their small family—alive.

In 1914, Joey, a beautiful bay-red foal with a distinctive cross on his nose, is sold to the army and thrust into the midst of the war on the Western Front. With his officer, he charges toward the enemy, witnessing the horror of the battles in France. But even in the desolation of the trenches, Joey’s courage touches the soldiers around him and he is able to find warmth and hope. But his heart aches for Albert, the farmer’s son he left behind. Will he ever see his true master again?

True story of two great friends: a baby hippo named Owen and a 130-year-old giant tortoise named Mzee.Ã‚Â  In December 2004, a young hippo separated from his family by the devastating tsunami in Southeast Asia, adopted an ancient Aldabra tortoise as his ” mother”. And the old tortoise, for years a loner, accepted the baby hippo as his own.Ã‚Â  They are now inseparable.