Calwyn, a young priestess of ice magic, or chantment, joins with other chanters who have different magical skills to fight a sorcerer who wants to claim all powers for his own. Calvin knows nothing about the world beyond the Wall. She’s never seen the golden stone of the city of Kalysons or the wide waters of the Bay of Sardi. She knows only the rounds of her life a a novice ice priestess in Antaris, tending her bees, singing her chantments, and dreaming.

Determined to recover the Adomal and to prevent the pirate Zavac from doing more damage, Hal and his brotherband crew persue Zavac to the lawless fortress of Ragusa where, if Hal is to succeed, he will have to go beyond his brotherband training and face the pirate one-on-one in a fight to the finish.

When Flaxfield the great wizard dies, his apprentice Sam is left without a master. Sam has great power–but he doesn’t know it yet. All he knows is that he needs a new master if he wants to finish his education in magic. With his dragon Starback at his side, Sam sets out alone on his quest. But there are those who want Sam’s power for themselves, dangerous forces who are waiting for his first mistake so they can attack. When Sam is tricked into making a mortal error, only Starback can save him, thanks to a bond between them that is deeper than either of them know. With a strong sense of adventure and a lyrical writing style, Toby Forward has created a page-turning, accessible fantasy with the literary quality of a classic. 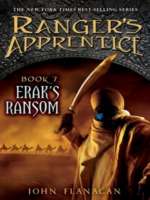 What does it mean to earn the Silver Oakleaf? So few men have done so. For Will, a mere boy, that symbol of honor has long felt out of reach. Now, in the wake of Araluen’s uneasy truce with the raiding Skandians comes word that the Skandian leader has been captured by a dangerous desert tribe. The Rangers are sent to free him. But the desert is like nothing these warriors have seen before. Strangers in a strange land, they are brutalized by sandstorms, beaten by the unrelenting heat, tricked by one tribe that plays by its own rules, and surprisingly befriended by another. Like a desert mirage, nothing is as it seems. Yet one thing is constant: the bravery of the Rangers. In this red-hot adventure, winner of the Australian Book of the Year Award for Older Children, John Flanagan raises the stakes on the series that has already sold millions of copies worldwide.

The king of Long City is dying. For Kai Zu, the news means more than it does for most former street rats in the small mountain stronghold, because he and the king’s daughter are close friends. Then the majestic ruler of the ghost dragons orders Kai to travel across the country to the Phoenix Empire, where the princess is learning statecraft. In a court filled with intrigue, Kai and his best (female) friend Yan must work together to help the princess escape and return to Long City.

Wilma Tenderfoot, a ten-year-old orphan who lives at Cooper Island’s Lowside Institute for Woeful Children, dreams of escape and of becoming the apprentice of the world-famous detective Theodore P. Goodman, whose every case she follows devotedly in the newspaper.

The third installment in the Relic Master quartet! The coronet, a potent ancient relic, might be the only way to defeat the power that is destroying Anara. But it has been lost for centuries, and only legend tells of its whereabouts.

Apprentice Tom and the Spook for whom he works flee to Ireland, where a powerful witch has joined forces with the dark mages trying to call forth ancient powers to destroy Tom.