The stories in Feathered Serpent, Dark Heart of Sky trace the history of the world from its beginnings in the dreams of the dual god, Ometeotl, to the arrival of the Spanish conquistadors in Mexico and the fall of the great city Tenochtitlan.

How music came to the world is the subject of this folktale dating to pre-Columbian times. Retells a Mexican legend in which the sky god and the wind god bring music from Sun’s house to the Earth.

Describes the history and customs of the Aztec civilization from its beginnings to its conquest by Spanish explorers.

The Aztecs built an advanced and dazzling empire that stretched across a large part of Mesoamerica.  The Chuampa “floating gardens” system of farming is perhaps their most remarkable accomplishment.  Other discoveries and inventions related to transportation, agriculture, architecture, science, and technology, enriched their culture and provide a way for us to experience parallels between ancient times and the world we know today.

Abuela’s visits from Mexico are always full of excitement for young Sabrina. She can’t wait to see what’s in her grandmother’s yellow suitcase covered in stickers from all the places she has visited. Opening it is like opening a treasure chest, and this year is no different. With her grandmother’s help, Sabrina learns all about the cacao tree, which was first cultivated by Mexico’s Indigenous tribes. Today, seeds from the cacao tree give us chocolate, but years ago the seeds were so valuable they were used as money. This charming bilingual picture book that depicts a loving relationship between grandmother and granddaughter and shares the history and customs of the native peoples, Mayan and Aztec, of Mexico. 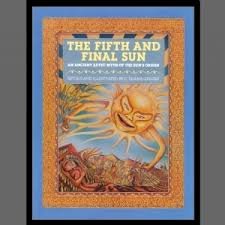 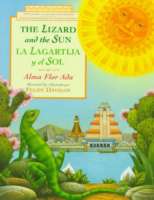 In a folktale illustrated with Aztec-Mexican artwork, the sun falls asleep behind a rock, blanketing the world in darkness, and is discovered by a faithful lizard, who, with the help of the emperor, encourages the sun to wake up.

In 15th-century Mexico, Tlilcatl, the Jaguar Warrior, battles the Spanish conquistadores for his family, culture, and empire in this graphic novel for children and adults. In both Spanish and English. Ages 8 and up.

Discusses the mythology from Indians of various regions of Mexico and Central America, describing origins, comparing the similar tales, and presenting some of the myths themselves.

An account of the establishment of the Aztec empire in Mexico and of the terrible battle between the Aztecs and the Spaniards known as the Sad Night, of La Noche Triste.

“This sensitive treatment of La Noche Triste, or The Sad Night, the last battle the Aztecs won against the Spaniards, is a highly effective melding of graceful, lucid text and stylized art. Designed to resemble Aztec codices, the illustrations appear in double-page strips above the bordered text. Beginning with the Aztec migration to Tenochtitlán (now Mexico City), the history of this people is traced through their final conquest by Cortés’s forces…. This title has the distinction of combining myth with historical fact in a particularly successful manner. An engaging introduction to Mexican history.” —School Library Journal