At a very strict school in Indigenous Nation, everyone but Holden stays in line until they reach the door at the end of the school day.

Through a series of strange coincidences, orphan Edie finds herself at Knight’s Haddon, a stately boarding school for girls. But Edie is not just another student–under normal circumstances, she could never afford to go to boarding school. She’s been sent to Knight’s Haddon by her art-dealer uncle to investigate the disappearance of a precious crystal bird that belongs to his secretive client’s daughter. Anastasia, a Russian royal, has a fragile disposition and a melodramatic bent–or so the headmistress and all the other girls say. Edie’s assignment is not only to find the missing glass bird; it’s to befriend the troubled blueblood and keep a watchful eye on her.

Teddy can’t believe how fast his life has changed in just two years. When he was twelve, his father took off, and then his mother married Henry, a man Teddy despises. But Teddy has no control over his life, and adults make all the decisions, especially in 1959. Henry decides that Teddy should be sent to St. Ignatius Academy for Boys, an isolated boarding school run by the Catholic church.
St. Iggy’s, Teddy learns, is a cold, unforgiving place — something between a juvenile detention center and reform school. The other boys are mostly a cast of misfits and eccentrics, but Teddy quickly becomes best friends with Cooper, a wise-cracking, Wordsworth-loving kid with a history of neglect. Despite the priests’ ruthless efforts to crack down on the slightest hint of defiance or attitude, the boys get by for a while on their wits, humor and dreams of escape. But the beatings, humiliation and hours spent in the school’s infamous “time-out” rooms, and the institutionalized system of power and abuse that protects the priests’ authority, eventually take their toll, especially on the increasingly fragile Cooper.
Then one of the new priests, Father Prince, starts to summon Cooper to his room at night, and Teddy watches helplessly as his friend withdraws into his own private nightmare, even as Prince targets Teddy himself as his next victim.

When Alice-Miranda goes home to her family’s lavish estate for the school holidays, along with her best friend Jacinta, their break is not exactly what they expected because of a cranky boy causing mischief, a visiting movie star, a snooping stranger, and a grandmother with a family secret.

Fourteen-year-old orphan Henry Grim’s schooling at the prestigious Knightley Academy continues, as he and some friends discover an old classroom filled with forgotten weapons which lead them into a dangerous adventure.

The sequel to A Little Princess, Sara Crewe has gone away with the Indian gentleman, and now nothing is the same at Miss Minchin’s. Spoiled Lottie, awful Lavinia, and shy Ermengarde are all left behind at the Select Seminary for Young Ladies, and the new maid, Alice from Epping, is a bright girl from the country whose practicality and confidence are a refreshing change from the stodgy Miss Minchin. Lottie learns to notice things and has adventures, Lavinia dreams of earning a place at Oxford, and Ermengarde realizes that friendship sometimes means keeping secrets.

Alison Dare: Indiana Jones meets Lara Croft in fabulous, graphic adventures.Alison Dare is not your typical twelve-year-old. She’s the daughter of an archaeologist/adventurer and the masked hero known as the Blue Scarab. To top it off, she’s also the niece of an international super-spy; it’s no surprise that a craving for danger is in her blood! Unfortunately, her parents have locked her away at the prestigious St. Joan’s Academy for Girls, hoping that this would lead to a more “normal” life for their daughter. But despite all the strict rules at the school, Alison and her best pals – Wendy and Dot – somehow manage to find themselves involved in adventures that rival those of Alison’s globetrotting, planet-saving relatives. Whether it’s magic genies, super-powered bank robbers, or a dastardly baron bent on world domination,Alison Daredelivers the best thrills since Indiana Jones and more action than Lara Croft! 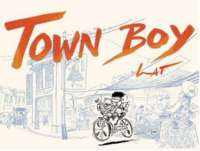 Malaysian teenager Mat makes a life-changing move from the quiet kampung where he was born to Ipoh, the rapidly industrializing nearby town.  Living far from his rural roots at a boarding school, he discovers bustling streets, modern music, heady literature, budding romance, and through it all his growing passion for art. The companion novel to the critically acclaimed Kampung Boy, Town Boy offers more of Lat’s delicious storytelling and enchanting pen-and-ink artwork.  At once exotic and familiar, his cartoon world builds a bridge for readers into another world, another culture, and another time.