The year is 1868, and fourteen-year-old Alika and his younger brother, Sulu, are hunting for seals on an ice floe attached to their island in the Arctic. Suddenly they hear the terrible sound of the floe breaking free from land. The boys watch with horror as they start drifting south–away from their home, their family, and everything they’ve ever known. Throughout their six-month-long journey down the Greenland Strait, the boys face bitter cold, starvation, and vicious polar bears. And yet, in this moving testament to the bond between brothers, Alika and Sulu remain hopeful that one day they’ll be rescued . Includes a map, a glossary of Inuit words and phrases, and an author’s note.

It may not be true but it could be – this story of how a single white stone came to be in the wall surrounding Casa Loma, the magnificient medieval castle that stands in the middle of Toronto.John Tommy Fiddich lives in Yorkville, tends the family vegetable patch, and considers himself the “luckiest boy in town.” When a hailstorm wipes out the vegetables, he goes from being the luckiest to the unluckiest. Then word gets out that Henry Pellatt, the eccentric millionaire who brought light to the city and built Casa Loma, is offering one dollar for brown stones to place in the wall going up around the castle. After trudging through the city all day with his stone, John reaches the castle only to find that rain has washed it white. But Henry Pellatt accepts the stone for his wall, rewarding John for his hard work, making him again “the luckiest boy in town.”The trip through the streets of Toronto, from Yorkville to Casa Loma, makes for a book as enchanting to young and old as the fabulous castle that inspired it. 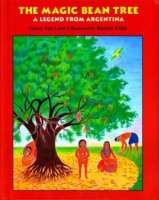 In the middle of the wide Argentine pampas there once grew a magic tree. Above this tree slept a bird so evil it could stop the rain from falling. And not far from this tree lived a brave boy who one day set out to save his village and all the creatures from dying of thirst. Illustrated with charming folk-art-like paintings and retold with simplicity and drama, this legend of a child’s courage and faith explains why Argentineans believe that good luck can be found in the shade of a carob tree. 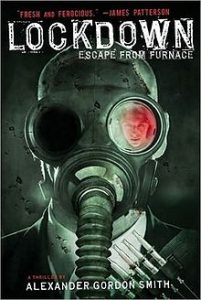 Furnace Penitentiary: the world’s most secure prison for young offenders, buried a mile beneath the earth’s surface. Convicted of a murder he didn’t commit, sentenced to life without parole, “new fish” Alex Sawyer knows he has two choices: find a way out, or resign himself to a death behind bars, in the darkness at the bottom of the world. Except in Furnace, death is the least of his worries. Soon Alex discovers that the prison is a place of pure evil, where inhuman creatures in gas masks stalk the corridors at night, where giants in black suits drag screaming inmates into the shadows, where deformed beasts can be heard howling from the blood-drenched tunnels below. And behind everything is the mysterious, all-powerful warden, a man as cruel and dangerous as the devil himself, whose unthinkable acts have consequences that stretch far beyond the walls of the prison. Together with a bunch of inmates—some innocent kids who have been framed, others cold-blooded killers—Alex plans an escape. But as he starts to uncover the truth about Furnace’s deeper, darker purpose, Alex’s actions grow ever more dangerous, and he must risk everything to expose this nightmare that’s hidden from the eyes of the world.

The record-breaking, bestselling sequel to Spud!

It’s 1991, and John “Spud” Milton’s journey to manhood is still creeping along at a snail’s pace. Nearly fifteen, Spud’s starting his second year at boarding school and—to his utter mortification—he’s still a spud!

To make things worse, his dorm mates, the legendary Crazy Eight, have an unusual new member (Roger the cat), and his house is home to a new batch of unruly first years. Spud is soon plagued with women trouble, coerced into expulsion-worthy adventures, and frustrated to find his dreams of fame in tatters after landing the part of the Dove of Peace in a disastrous production of Noah’s Ark.

Join Spud as he takes another tentative step forward while all around him the madness continues. . . .

Twelve-year-old Ambrose is a glass-half-full kind of guy. A self-described “friendless nerd,” he moves from place to place every couple of years with his overprotective mother, Irene. When some bullies at his new school almost kill him by slipping a peanut into his sandwich — even though they know he has a deathly allergy — Ambrose is philosophical. Irene, however, is not and decides that Ambrose will be home-schooled.Alone in the evenings when Irene goes to work, Ambrose pesters Cosmo, the twenty-five-year-old son of the Greek landlords who live upstairs. Cosmo has just been released from jail for breaking and entering to support a drug habit. Quite by accident, Ambrose discovers that they share a love of Scrabble and coerces Cosmo into taking him to the West Side Scrabble Club, where Cosmo falls for Amanda, the club director. Posing as Ambrose’s Big Brother to impress her, Cosmo is motivated to take Ambrose to the weekly meetings and to give him lessons in self-defense. Cosmo, Amanda, and Ambrose soon form an unlikely alliance and, for the first time in his life, Ambrose blossoms. The characters at the Scrabble Club come to embrace Ambrose for who he is and for their shared love of words. There’s only one problem: Irene has no idea what Ambrose is up to.In this brilliantly observed novel, author Susin Nielsen transports the reader to the world of competitive Scrabble as seen from the honest yet funny viewpoint of a boy who’s searching for acceptance and for a place to call home.

For Kariuki, life in a small village in Kenya is one great adventure. The best part of his day is the walk home from school, when he is free from both his bullying headmaster and his mother’s long list of chores. The landscape around his village is beautifully wild, and Kariuki knows it well. One day Kariuki meets Nigel, a boy from England who has come to visit his grandfather, the fearsome Bwana Ruin, who owns the farm where the villagers work. The villagers call Nigel the mzungu boy (westerner), and view him with suspicion and fear, but not Kariuki. One day the boys decide to hunt down the meanest warthog in the forest. The hunt takes them deeper into the jungle than Kariuki has ever gone, and all at once his beloved forest becomes a frightening place. Dangerous creatures live in the jungle, including the mau-mau, the men with guns who are plotting against Bwana Ruin and the white soldiers. And when Nigel suddenly disappears, will Kariuki be able to save his friend?In this novel, the author captures a time of innocence, wild beauty, and the growing violence that eventually changed the entire structure of colonial Africa.