When you live at the edge of the no-go desert, you need to make your own fun. That’s when you and your brothers get inventive and build a bike from scratch, using everyday items like an old milk pot (maybe Mum is using it, maybe not), a bent bucket seat, and bashed tin-can handles. The end result is a spectacular bike, perfect for going bumpetty bump over the sand hills, past your fed-up mum, and right through your mud-for-walls home.

Let’s build a tree fort,” Russell says to his dad when they move into a house with a big maple tree in the backyard. His dad doesn’t know much about building, but he gamely follows Russell’s plan. Several trips to the lumber store later, the tree fort is done. There is no slide, balcony or skylight like Russell imagined, but it is perfect ― right up until he notices another tree fort going up three houses over.

Edgar the mouse is frustrated when his architectural and artistic creations, made from tasty leftovers, are gobbled up by other mice, until he finds the perfect solution. 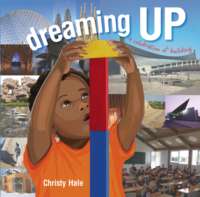 A collection of concrete poetry, illustrations, and photographs that shows how young children’s constructions, created as they play, are reflected in notable works of architecture from around the world. Includes biographies of the architects, quotations, and sources.

Illustrations and rhyming text show the enormous and powerful machines that are used to demolish a building so that a playground can be built.

This dynamic title takes the form of Corry’s scrapbook. It’s a dazzling collection of postcards, brochures and other memorabilia documenting Corry’s research into green design. Kid-friendly language explains the engineering behind some of the planet’s most cutting edge towers, bridges, tunnels, domes, dams, dikes, locks and levees. These structures include the Vizcaya Bridge in Spain, where gondolas transport cars over the Nervion River, and the Channel tunnel, where trains speed between England and France in just 35 minutes.

This Little Pig has made a lovely little den for herself in the woods, and that Little Pig has built a small hut right next door.  One morning they return from a walk to find that their big friend Bearhas moved into the little den and their even larger friend Moose has moved into the little hut.  It’s very nice ot have friends live with you, but not so nice when both homes collapse!  But what if they find a way to build a house in the woods that all four of them can share?

With atmospheric illustrations and a cast of endearing, industrious character, Inga Moore constructs an inviting story of friendship that kids will be happy to visit.

As legend tells it, the Old-New Synagogue in Prague was built by angels, and later was home to a golem who remains locked away in the building to this day. In lyrical prose, Mark Podwal shares the story of the world’s oldest active synagogue, which was completed in 1270. Throughout the years, this sacred place of prayer and celebration has endured plagues, wars, and the Nazi regime. Its story is part legend, part history, and one that stands as a testament to the perseverance of the Jewish people. 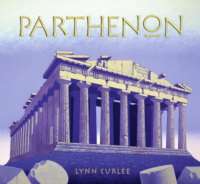 The Parthenon. It was ravaged by the early Christians, occupied by the Turks, and looted by the British. Wars were fought all around it. Plato and Socrates, Phidias and Pericles contemplated philosophy, art, drama, and democracy on its steps. And today its proud, ruined columns stand high above the city of Athens, Greece, the last sentinels of what’s often considered to be the most important architectural achievement in the world. The Parthenon is without rival in regard to its beauty, purity of design, and tumultuous history. It grew out of war and strife, political uprisings and financial difficulties, and remains a symbol of what humanity — at its very best — is capable of accomplishing.