Lou and her friends are BRAVE adventurers. They run FASTER than airplanes. They build MIGHTY fortresses. They rescue WILD animals. But one day, when they’re looking for a ship to play pirates in, Lou’s friend has an idea: Up there! The tree can be our ship! Ummm …says Lou.

In the developed world, if you want a drink of water you just turn on a tap or open a bottle. But for millions of families worldwide, finding clean water is a daily challenge, and kids are often the ones responsible for carrying water to their homes. Every Last Drop looks at why the world’s water resources are at risk and how communities around the world are finding innovative ways to quench their thirst and water their crops. Maybe you’re not ready to drink fog, as they do in Chile, or use water made from treated sewage, but you can get a low-flush toilet, plant a tree, protect a wetland or just take shorter showers. Every last drop counts!

Marilyn Dumont’s Metis heritage offers her challenges that few of us welcome. Here she turns them to opportunities in a voice that is fierce, direct, and true, she explores and transcends the multiple boundaries imposed by society on the self. She mocks, with exasperation and sly humour, the banal exploitation of Indianness, more-Indian-than-thou oneupmanship, and white condescension and ignorance. She celebrates the person, clearly observing, who defines her own life. These are Indian poems, Canadian poems, human poems. 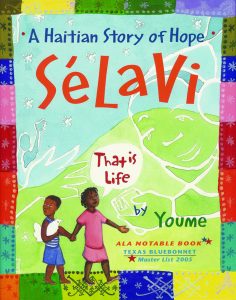 As a Chicano boy living in the unglamorous town of Hollywood, New Mexico, and a member of the graduating class of 1969, Sammy Santos faces the challenges of “gringo” racism, unpopular dress codes, the Vietnam War, barrio violence, and poverty.

Meet Manuel, a young man who wears hand-me-downs from his older brothers until he finally gets a brand-new pair of shoes. And Jose Luis, who watches the vet bills rise after he buys a sick rooster to save it from becoming someone’s dinner. And Alma, a young woman who runs to every shop and flea market in town buying back the clothes of her dead mother that her father has given away. These Mexican American youths meet life’s challenges head-on in this hard-hitting collection of short stories.

Left under his older brother’s care when his mother dies in childbirth, Midget, a physically challenged boy, is viciously abused by his brother throughout his first fifteen years, and Midget’s only friend is an elderly boat builder.