Vicky has always felt responsible for her mentally disabled twin sister, Rhianna, and their feisty little brother, Jamie. So when the foster care system threatens to split them up, they all run away together, heading for a distant relative’s home. After a difficult journey, they arrive only to find strangers living there. With nowhere else to go, they hide in a cave, and must survive by their wits. By the end of their adventure, Vicky is surprised to find that the sister she thought she was protecting is the one who saves her. This touching, funny, fast-paced novel was short listed for the Waterstone’s Children’s Book Prize. Vicky and Rhianna’s engaging dual-perspective narration offers a refreshing view of people with disabilities, and their wild adventure and fierce family bond will resonate with readers.

Ballerina Bear Barbara, who lives in a child’s room in Paris, discovers that while it is nice to make new friends, old friends should never be forgotten.

After a falling out, two very different friends explore all the things they can do without each other…and discover that life is much sweeter when it’s shared with one another. An endearing look at the ups and downs of friendship, this is a book you’ll want to share with someone special.

This playful science book introduces the biology of human evolution and behavior with an accessible, interactive text packed with information and wry, bright computer graphics on each spread.

Tengo is the 10-year-old son of workers on Oom Koos’s large farm in the Transvaal. He longs to go to school like his friend Frikkie, who visits his uncle’s farm on holidays. But Tengo’s family is too poor to pay for the education that comes free to whites. He finally gets his wish at age 14. Tengo goes to live with his cousin in a squalid township outside Johannesburg and studies furiously. After three years, he is almost ready for college, but a year-long school boycott ruins his chances and he is drawn into the fight against apartheid. When he and Frikkie meet in a violent confrontation, Tengo realizes that he will carry on the struggle for freedom as a scholar, not a soldier. The writing here is powerful, evoking in minute detail daily life and the broad landscapes of the country.

All of Emily’s friends have someone special to take them to the ice cream parlor, or the ballet, or the park. Now that her mother is busy with the new baby, Emily doesn’t have anyone to entertain her — no uncles or big sisters or aunts. Emily sets out to solve her little difficulty and succeeds beyond her wildest dreams. The result is eighteen eager aunts, who cause mayhem wherever they go. If only they weren’t so. . .different. Now Emily has a much bigger problem. How can she stop the aunts from embarrassing her without hurting their feelings? Emily’s Eighteen Aunts is a warm, funny look at what happens when one thing leads to another — and another. And happily, Emily finds out that being different is far more fun than she thought possible.

Tiny dynamo Nilly and his friend Lisa, first introduced in Doctor Proctor’s Fart Powder (S and S, 2010), return to save the day (and the doctor). At the end of their last outing, Doctor P. headed back to Paris to save the love of his life, Juliette Margarine, from having to marry evil Claude Cliché. A mysterious postcard from the past sends Nilly and Lisa on a mission to rescue him, both helped and hindered by the doctor’s crazy inventions, including a time-traveling bathtub and translating nose plugs. A whirlwind tour of French history ensues, including stops at the Moulin Rouge, the Tour de France, Waterloo, the Bastille, Monsieur Eiffel’s workroom, and Joan of Arc’s jail cell, with our heroes changing history right and left. Chasing them through time is Raspa, Proctor’s one-legged former assistant, inventor of time-travel soap, who makes the ultimate sacrifice to atone for past misdeeds.

Maybe it’s the king who spills honey, and then says it is not his problem until it causes a war. Or maybe it’s some sandpipers and whales who get into a foolish fight that almost destroys their homes. Perhaps it’s the man who thinks that a gun makes him strong, or the monkeys who follow their leader into water that’s too deep. 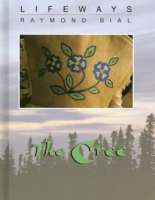 Discusses the history, culture, beliefs, changing ways and notable people of the Cree.