At the age of seven, children in eighteenth-century Britain were tried in court like adults. For crimes such as picking pockets or stealing clothes, they could be sentenced to death by hanging or transported to the then-perilous and isolated colonies of Australia. Life in the colonies was often as difficult and dangerous as the poverty from which many of the convicts came, but the dreaded sentence of transportation could also present opportunities. 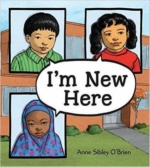 Three children from other countries (Somalia, Guatemala, and Korea) struggle to adjust to their new home and school in the United States.

A total of 15,000 children under the age of fifteen passed through the Terezin Concentration Camp between the years 1942-1944; less than 100 survived. In these poems and pictures drawn by the young inmates of Terezin, we see the daily misery of these uprooted children, as well as their courage and optimism, their hopes and fears. The ghetto of Terezin (Theresienstadt), located in the hills outside Prague, was an unusual concentration camp in that it was created to cover up the Nazi genocide of the Jews. Billed as the “Fuhrer’s gift to the Jews, ” this “model ghetto” was the site of a Red Cross inspection visit in 1944. With its high proportion of artists and intellectuals, culture flourished in the ghetto – alongside starvation, disease, and constant dread of transports to the death camps of the east.

“What is a school? Is it a building with classrooms? Or can it be any place where children learn?” The fascinating stories that follow will expand how young readers think of school, as they learn about the experiences of real children in thirteen different countries around the world. 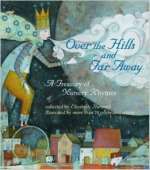 Adorable Granpa gamely nurses his granddaughter’s dolls, eats her pretend strawberry-flavored ice cream, takes her tobogganing in the snow, and falls in step with her imaginary plans to captain a ship to Africa—like all good grandfathers should. Winner of the Kate Maschler Award, this poignant tale of friendship and loss is one children will long remember.

Two abandoned children come upon a gingerbread cottage inhabited by a cruel witch who wants to eat them. Gaiman and fine artist Lorenzo Mattotti join forces to create Hansel and Gretel, a stunning book that’s at once as familiar as a dream and as evocative as a nightmare. Mattotti’s sweeping ink illustrations capture the terror and longing found in the classic Brothers Grimm fairy tale. Neil Gaiman crafts an original text filled with his signature wit and pathos that is sure to become a favorite of readers everywhere, young and old.force 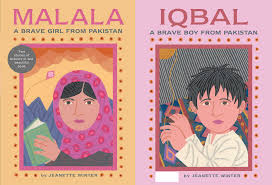 One country: Pakistan. Two children: Iqbal Masih and Malala Yousafzai. Each was unafraid to speak out. He, against inhumane child slavery in the carpet trade. She, for the right of girls to attend school. Both were shot by those who disagreed with them—he in 1995, she in 2012. Iqbal was killed instantly; Malala miraculously survived and continues to speak out around the world. She was awarded the Nobel Peace Prize in 2014 for her work. 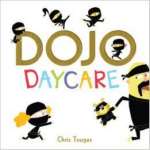 One morning, six young ninjas are dropped off at Dojo Daycare. As soon as their ninja moms and ninja dads have left: KABOOM! KAPOW! The ninja boys and girls kick, push, punch, and quickly turn the place upside down in a full-blown ninja riot. Try as he might, the hapless master can’t control the children, and the disaster plays out through lunchtime and story time. 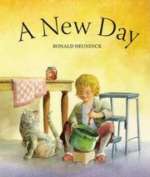 This classic, much-loved board book without text leads young children through the rhythms of the day. The fun, simple illustrations show children doing everyday activities such as getting up, having breakfast, feeding the ducks, making lunch, playing and enjoying a bedtime story. This chunky book is perfect for little hands, and children will love to spot the detail in each picture.