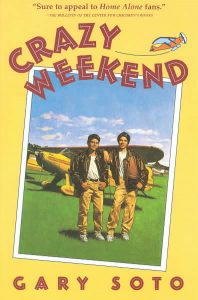 Hector and Mando, two Chicano seventh graders from East Los Angeles, visit Hector’s uncle in the less-than-exciting town of Fresno and find plenty of excitement, laughs, and thrills after they witness a robbery and are chased by the dim-witted criminals.

A few things to know about Dylan. He is the only boy in his entire town. His best friends are two pet chickens. Criminal instincts run in his family. And one more small thing about nine-year-old Dylan—the crime of the century has just fallen into his lap.

Twelve-year-old Nettie’s sheltered and privileged life changes after her beloved tutor mysteriously disappears and Nettie, aided by the son of a household employee, begins to learn the truth about her father, whose wealth began with trafficking in illegal aliens.

After the harrowing experience of losing his mother while solving a brutal murder in London’s East End, young Sherlock Holmes commits himself to fighting crime … and is soon involved in another case. While visiting his father at the magnificent Crystal Palace, Sherlock stops to watch a remarkable and dangerous trapeze performance high above, framed by the stunning glass ceiling of the legendary building. Suddenly, the troupe’s star is dropping, screaming and flailing, toward the floor. He lands with a sickening thud just a few feet away, and rolls up almost onto the boy’s boots. Unconscious and bleeding profusely, his body is grotesquely twisted. In the mayhem that follows, Sherlock notices something that no one else sees — something is amiss with the trapeze bar! He knows that foul play is afoot. What he doesn’t know is that his discovery will put him on a frightening, twisted trail that leads to an entire gang of notorious criminals. Wrapped in the fascinating world of Victorian entertainment, its dangerous performances, and London’s dark underworld, Death in the Air raises The Boy Sherlock Holmes to a whole new level.Be sure not to miss Eye of the Crow, The Boy Sherlock Holmes, His First Case.

Some view the systematic killing, rape, and destruction of homes in Darfur as a grave humanitarian crisis. For others, it’s a clear example of the ultimate crime against humanity — genocide. This book helps young readers understand these and other difficult questions. Providing an overview of the history of genocide worldwide, the book explores the paradox that while a person who murders another person can be tried and even executed for the crime, a person who murders hundreds or thousands of people usually goes free. Using case studies of acts of genocide throughout history, the book points out the unique character of each while at the same time establishing important links between them.

Luke Harding is excited to become the youngest person ever to qualify as a forensice invstigator.  He barely has time to celebrate his final exams when Malc, his Mobile Aid to Law and Crime, calls him to their first case. A fellow student has been mysteriously shot dead with an arrow. Two more grisly on-campus murders follow, and all the evidence points to Luke himself. The stakes are high as Luke sets out to prove his innocence and show that he has the talent to crack any crime.

Sherlock Holmes, just thirteen, is a misfit. His highborn mother is the daughter of an aristocratic family, his father a poor Jew. Their marriage flouts tradition and makes them social pariahs in the London of the 1860s; and their son, Sherlock, bears the burden of their rebellion. Friendless, bullied at school, he belongs nowhere and has only his wits to help him make his way.But what wits they are! His keen powers of observation are already apparent, though he is still a boy. He loves to amuse himself by constructing histories from the smallest detail for everyone he meets. Partly for fun, he focuses his attention on a sensational murder to see if he can solve it. But his game turns deadly serious when he finds himself the accused — and in London, they hang boys of thirteen. Shane Peacock has created a boy who bears all the seeds of the character who has mesmerized millions: the relentless eye, the sense of justice, and the complex ego. The boy Sherlock Holmes is a fascinating character who is sure to become a fast favorite with young readers everywhere.

Cadel Piggott has a genius IQ and a fascination with systems of all kinds. At seven, he was illegally hacking into computers. Now he’s fourteen and studying for his World Domination degree, taking classes like embezzlement, misinformation, forgery, and infiltration at the institute founded by criminal mastermind Dr. Phineas Darkkon. Although Cadel may be advanced beyond his years, at heart he’s a lonely kid. When he falls for the mysterious and brilliant Kay-Lee, he begins to question the moral implications of his studies for the first time.

Charlie’s father is dead, and although his mother insists he stay in school, Charlie has no patience for the classroom. All he wants is to make money, to give his mother and baby brother a better life. So when he catches the eye of Squizzy Taylor, a notorious mobster, and is offered a job as Squizzy’s courier, it doesn’t take Charlie long to accept—even if he has to go against his own mother’s wishes. At first, the job’s a thrill—running with messages, illegal liquor, whatever Squizzy orders. It fills Charlie with power. But then come the not-so-savory parts of the job. Collecting Squizzy’s debts. Dodging Squizzy’s enemies. The very real dangers of the streets. And at some point Charlie has to ask himself—how long before running for a better life means cutting his life short?