The star of Orange Is the New Black and Jane the Virgin, Diane Guerrero presents her personal story in this middle grade memoir about her parents’ deportation and the nightmarish struggles of undocumented immigrants and their American children. 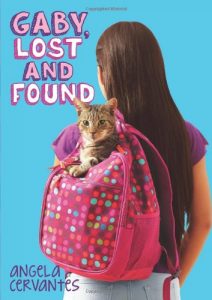 Wanted: One amazing forever home for one amazing sixth grader.”My name is Gaby, and I’m looking for a home where I can invite my best friend over and have a warm breakfast a couple of times a week. Having the newest cell phone or fancy clothes isn’t important, but I’d like to have a cat that I can talk to when I’m home alone.” Gaby Ramirez Howard loves volunteering at the local animal shelter. She plays with the kittens, helps to obedience train the dogs, and writes adoption advertisements so that the strays who live there can find their forever homes: places where they’ll be loved and cared for, no matter what. Gaby has been feeling like a bit of a stray herself, lately. Her mother has recently been deported to Honduras and Gaby is stuck living with her inattentive dad. She’s confident that her mom will come home soon so that they can adopt Gaby’s favorite shelter cat together. When the cat’s original owners turn up at the shelter, however, Gaby worries that her plans for the perfect family are about to fall apart. 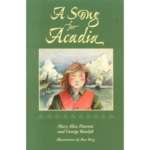 In 1755, young Timothy is sent from Boston to live with his mother’s relatives in Acadia. As the story unfolds, Timothy grows to love the beauty of the Acadian landscape and the close-knit, hardworking Acadian community. One June night, American soldiers — who had come under the guise of a fishing party — ransack the Acadians’ houses for arms while their hosts lie sleeping. This treacherous event portends the disaster that follows later that summer: the Acadian deportation.

José loves helping Mamá in the garden outside their home in California. But when Mamá is sent back to Mexico for not having citizenship papers, José and his Papá face an uncertain future. What will it be like to visit Mamá in Tijuana? When will she be able to come home? Award-winning children’s book author René Colato Laínez tackles the difficult and timely subject of family separation with exquisite tenderness. Joe Cepeda’s bright and engaging illustrations bring this story of hope to vivid life.

French language version of A Proper Acadian. Set during the American Revolution, a young man from Boston is sent to Acadia and faces deportation.

Smoke Over Grand Pré provides a glimpse into the lives of people who lived during the period that led up to the Acadian deportation. The eviction of Acadians from Nova Scotia by the English gove ment represents an important chapter in the history of Nova Scotia and of Canada.

After eleven-year-old Zitlally’s father is deported to Mexico, she takes refuge in her trailer park’s forest of rusted car parts, where she befriends a spunky neighbor and finds a stray dog that she nurses back to health and believes she must keep safe so

‘”The best way to avoid being picked on by high school bullies is to kill someone.\”Karina has plenty to worry about on the last day of seventh grade: finding three Ds and a C on her report card again, getting laughed at by everyone again, being sent to the principal — again. She\’d like this to change, but with her and her sisters dodging their stepfather\’s fists every day after school, she doesn\’t have time to do much self-reflecting. Finally her stepfather is taken away on child abuse charges, and Karina thinks things might turn into something resembling normal. The problem is, he\’s not gone for good. And as Karina becomes closer with a girl at the community center where her stepfather is not showing up for his parenting classes, she starts to realize a couple things. First, for all the problems her family had tried to escape by immigrating from Haiti, they brought most of them along to upstate New York. And second, if anything is going to change for this family, it is going to be up to Karina and her sisters to make it happen.M. Sindy Felin\’s debut novel is the story of a young girl\’s coming-of-age amid the violent waters that run just beneath the surface of suburbia — a story that has the courage to ask: How far will you go to protect the ones you love?