Darius Kellner speaks better Klingon than Farsi, and he knows more about Hobbit social cues than Persian ones. He’s a Fractional Persian–half, his mom’s side–and his first-ever trip to Iran is about to change his life. Darius has never really fit in at home, and he’s sure things are going to be the same in Iran. His clinical depression doesn’t exactly help matters, and trying to explain his medication to his grandparents only makes things harder. Then Darius meets Sohrab, the boy next door, and everything changes. Soon, they’re spending their days together, playing soccer, eating faludeh, and talking for hours on a secret rooftop overlooking the city’s skyline. Sohrab calls him Darioush–the original Persian version of his name–and Darius has never felt more like himself than he does now that he’s Darioush to Sohrab. Adib Khorram’s brilliant debut is for anyone who’s ever felt not good enough–then met a friend who makes them feel so much better than okay.

This moving graphic novel tells the story of the affection between a girl and her grandfather. When the grandfather withdraws in grief after his wife dies, the girl is determined to live life fully herself and enters an extraordinary contest — the result is a sensitive portrayal of pursuing a dream.Grandfather, a man of few words, is devastated when his beloved wife succumbs to cancer, and he sinks into depression. His granddaughter (“MarMar,” as he calls her) has a different response. She decides to enter the Who Will Go to the Moon Contest, and when she actually wins, she hopes that Grandfather will be proud of her. She embarks on the thrilling journey and at first it is wonderful, but just as she is about to reach the moon, her journey takes an unexpected turn. 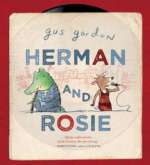 Once upon a time in a very busy city, on a very busy street, in two very small apartments, lived Herman and Rosie. Herman liked playing the oboe, the smell of hot dogs in the winter, and watching films about the ocean. Rosie liked pancakes, listening to old jazz records, and watching films about the ocean. They both loved the groovy rhythm of the city, but sometimes the bustling crowds and constant motion left them lonely. One day, they lost their job and they lost the urge to play music. Finally they came to listen to each other’s music. 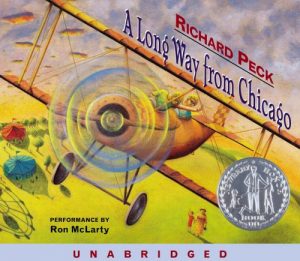 What happens when Joey and his sister, Mary Alice–two city slickers from Chicago–make their annual summer visits to Grandma Dowdel’s seemingly sleepy Illinois town?August 1929: They see their first corpse, and he isn’t resting easy.August 1930: The Cowgilll boys terrorize the town, and Grandma fights back with a dead mouse and a bottle of milk.August 1931: Joey and Mary Alice help Grandma to trespass, pinch property, poach, catch the sheriff in his underwear, and feed the hungry–all in one day.And there’s more–much more–as Joey and Mary Alice make seven summer trips to Grandma’s, each one funnier and more surprising than the year before. In the grand storytelling tradition of American humorists from Mark Twain to Flannelly O’Connor, Richard Peck has created a memorable world filled with characters who, like Grandma herself, are larger than life and twice as entertaining. And year round, you are sure to enjoy your stay with them.

Seventeen-year-old Kidd Ellison runs away to work for the summer at a beach campsite in California where his hard work and good looks lead to friendship and love but painful past memories surface in menacing ways.

In a series of poems, fifteen-year-old Billie Jo relates the hardships of living on her family’s wheat farm in Oklahoma during the dust bowl years of the Depression.

Miles “Pudge” Halter is abandoning his safe-okay, boring-life. Fascinated by the last words of famous people, Pudge leaves for boarding school to seek what a dying Rabelais called the “Great Perhaps.”
Pudge becomes encircled by friends whose lives are everything but safe and boring. Their nucleus is razor-sharp, sexy, and self-destructive Alaska, who has perfected the arts of pranking and evading school rules. Pudge falls impossibly in love. When tragedy strikes the close-knit group, it is only in coming face-to-face with death that Pudge discovers the value of living and loving unconditionally.
John Green’s stunning debut marks the arrival of a stand-out new voice in young adult fiction. 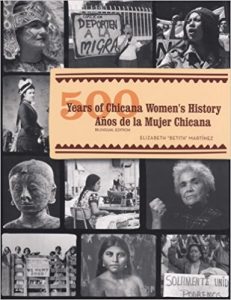 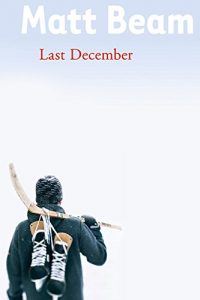 A teenager, struggling with depression and contemplating suicide, tries to sort out his emotions in a letter to his unborn sister. Fifteen-year-old Steven is struggling with depression and contemplating suicide. He decides to write a letter to his unborn sister explaining why he is wants to end his life. She needs to know about the girl from his new high school and how the freckles on her arm make him go crazy. She needs to know about the Toronto Maple Leafs and trying out for the school hockey team. She needs to know about Byron, all his ideas about chaos and coolness and trying to keep it together. Steven doesn’t know why his mother’s having a baby in the first place … and if the baby is actually a she. Whatever happens, though, Steven knows one thing: he needs to get this all down, so that someday his baby sister will know what happened to him – to all of them – last December.