When her imagined perfect life with her estranged mother begins to unravel, fourteen-year-old Apple finds comfort in reading and writing poetry.

Enrique, a young boy in Peralta Middle School, faces abuse at home and danger on the barrio streets. Yet he is driven to succeed by the desire to join that “other America” he sees on TV and in the movies, and is aided in his quest by compassionate teachers. His ambition finds expression in his determination to drop his ESL class in favor of taking French, and his story begins, “Call me Henr.”

Lorraine Lpez (author of Soy la Avon Lady and Other Stories) has created a vivid picture of barrio life, filled with honesty, insight, and humor for young adults. She paints a balanced and detailed landscape of Enrique’s world. Although Enrique is confused and angered by his mother’s refusal to stand up for him against the abuse of his stepfather, he also draws strength from the supportive and loving family of his friend Francisco. While some of his teachers are uncaring or inept, others provide help and encouragement at critical moments in his life.

When Enrique witnesses his friend Horacio gunned down in a drive-by shooting and is seen by the assailants, gang members set out to kill him. As the novel reaches its climax, Enrique must make some agonizing decisions.

Although specifically about barrio life, this novel is universal in its themes-the drive for success, the desire for love and family support, and the need for true friendship. Lpez’s fully delineated characters provide a rich and credible mural of our human comedy.

Lorraine Lpez‘s Soy la Avon Lady and Other Stories was selected for the Marmal Prize, and also won the IPPY Award for Multicultural Fiction. 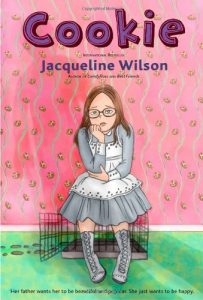 Cookie is plain and shy, not the confident, popular girl her father wanted when he named her Beauty Cookson. Her mother helps her cook up a clever scheme to change her image–but, as usual, Dad doesn’t approve, and this time his anger reaches frightening new heights. Will Cookie find the strength to stand up for herself? Honest and emotionally resonant, COOKIE faces tough issues with the unflinching directness and unflagging tenderness that make Jacqueline Wilson one of today’s most admired-and popular-authors for young people.