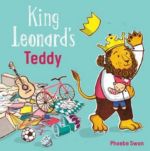 King Leonard is so rich that he can buy whatever he wants. Anything old or broken is thrown onto the growing pile of trash outside his castle. But one day something breaks that can’t be easily replaced. And what’s worse, King Leonard can’t find anyone who knows how to fix it. Phoebe Swan’s striking illustrations grace this powerful story with a strong environmental message.

A Suquamish Indian chief describes his people’s respect and love for the earth, and concern for its destruction. 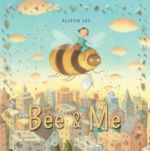 A little girl befriends a bee that takes her on a journey of discovery, revealing an action that every child can take to aid in conservation.

Cumulative text describes the interdependence among the plants and animals of an African savanna. Giraffes, lions, hippos, elephants, and many more animals are all part of the food web of the African savanna. 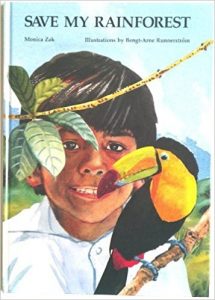 Eight-year-old Omar Castillo fulfills his dream of visiting the endangered rainforest of southern Mexico and wins an audience with the president of Mexico to express his concern. 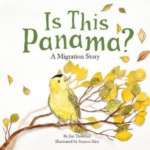 When Sammy, a young Wilson’s warbler, wakes up one frosty August morning near the Arctic Circle, he instinctively knows that it’s time to make his first migratory journey south to Panama. But there’s one problem — where’s Panama? All the other warblers having left without him, Sammy sets off on his journey by himself, stopping to ask the same question of each of the different animals that he meets along the way: “Is this Panama?” 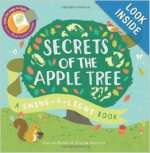 Explore a tree up close and you will find a small world filled with great surprises. From worms wriggling among the roots, to birds nesting high in the branches, the hidden wonders of this amazing habitat are revealed.

Simple text reveals the benefits of planting a single tree, both to those who see it grow and to the world as a whole.

Suspended from school for cussing at a mean teacher, John “Spud”’ Sweetgrass at least still has his job selling french fries from a curbside “chip wagon.” But he notices that something stinks — literally. It’s the smell of rancid cooking oil at a polluted Ottawa beach. His suspicions aroused, Spud follows Dumper Stubbs, a creepy delivery man who services local restaurants and chip wagons. Spud gets angry when he sees Dumper living up to his name, dumping oil into a storm drain and causing terrible pollution in the river. When Spud blows the whistle, he loses his job. Enlisting the help of his buddy Dink the Thinker, and Connie Pan — whom he calls his girlfriend though she isn’t exactly that — Spud thinks he has a chance of regaining his job and stopping the Dumper’s harmful activities. In the background of this offbeat farce are serious issues that Spud must also deal with, including his father’s death, his mother’s withdrawal into grief, and his own awkward transition through adolescence. Brian Doyle expertly interweaves comedy and important contemporary concerns of young people in this vivid story with a message.

A lyrical description of the ancient baobab tree and how it provides shelter and nourishment to wildlife of the African plain.