On a beautiful Arctic morning, Kumak looks out the window of his house at the sun rising over the frozen river. “Ahhh, spring,” says Kumak to his family. “The days are long, the nights are short, and the ice is still hard. Good day for fish.” Eager to give Uncle Aglu’s amazing hooking stick a try, Kumak packs up his family and heads out to go ice fishing. “Good day for fish!” they all agree. Hapless Kumac is the only one in his family without fish until the tug at the other end of his line incites a mighty battle. A clever ending reveals that the whale-sized fish that Kumak imagined was actually a line of small fish in tug o’ war position. Kumak reigns, and there’s plenty for everybody. Authentic details throughout the playful art and text, as well as endnotes on Inupiat fishing, provide young readers with a fascinating window into another culture in this follow up to KUMAK’S HOUSE a 2003 Children’s Book Council Notable Trade Book in Social Studies. 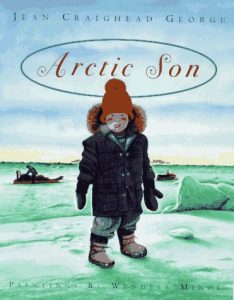 A baby boy is given an Inupiat name to go with his English one and grows up learning the traditional ways of the Eskimo people living in the Arctic.

Amaroq is a lively Eskimo boy who fives at the top of the world with his best friend, Nutik, the wolf pup. Amaroq was named after a great wolf leader; Nutik is the wolf leader’s grandpup. The boy and the wolf pup are like brothers.One day Amaroq and Nutik want to play football, but their ball has disappeared. What shall they do? Listening to and observing Nutik’s wolf talk, Amaroq follows him outside. The two friends wander out onto the tundra, where there are no trees, no paths, and no landmarks to help them find their way home again. Amaroq is afraid they are lost, but then he remembers what the great wolf leader he was named after would do. By observing nature and following what it says, Amaroq and Nutik are safe again-but not before finding a surprise for both of them!Amaroq and Nutik’s adventure follows the first picture book about them, Nutik, the Wolf Pup, and continues the Arctic saga about these characters originally drawn from Julie’s Wolf Pack, sequel to the Newbery Medal-winning Julie of the Wolves. 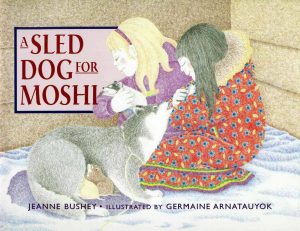 Moshi wants a pet dog like her friend Jessica has, but in Iqaluit, Alaska, dogs are used for racing or pulling sleds, not as pets. 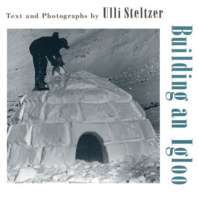 In crisp black-and-white photographs, Ulli Steltzer documents the beauty and precision of an igloo’s construction – from stacking blocks of snow to cutting a door – in this informative picture book. 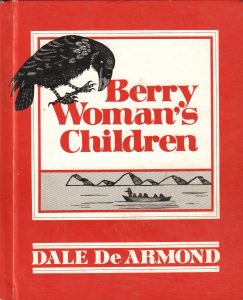 According to Eskimo myth, Berry Woman was asked by Raven to look after the animals and birds. Superb woodcuts illustrate the Eskimo legends that Grandmother tells to her rapt audience, four children clinging to her “on the bedplace.”