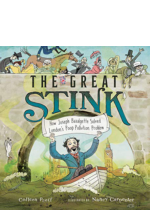 It’s the summer of 1858, and London’s River Thames STINKS. What is creating this revolting smell? The answer is gross: the river is full of poop.
But the smell isn’t the worst problem. Every few years, cholera breaks out, and thousands of people die. Could there be a connection between the foul water and the deadly disease?
One engineer dreams of making London a cleaner, healthier place. His name is Joseph Bazalgette. His grand plan to create a new sewer system to clean the river is an engineering marvel. And his sewers will save lives. Nothing stinky about that.
With tips for how to prevent pollution today, this fascinating look at science, history, and what one person can do to create change will impress and astound readers who want to help make their planet a cleaner, happier place to live.

The renowned Napoleon Bonaparte faces an army of a different sort in this witty, unconventional telling of a true event in his life. Everyone knows the Battle of Waterloo was Napoleon Bonaparte’s most crushing defeat, right? Well, some beg to differ. It seems there was another less famous (though perhaps more humiliating) surrender in his past. Let’s call it Bunnyloo. In 1807, Napoleon had ordered his chief of staff to round up rabbits for a celebratory hunt, only, he collected domesticated rabbits, not wild ones. So, when the rabbits were released to begin the hunt, they didn’t run away. Instead, they ran straight at Napoleon and his hunting party. Now, some might think Napoleon — king overthrower, army commander, territory conqueror — would only laugh at an advancing battalion of cute, fluffy bunnies. Think again!

Even The Queen Of England Has To Get Up And Groomed To Greet The Day Get Up, Elizabeth! It’s Time For The Future Queen To Get Out Of Bed, Scrub Her Face With Almond Paste, Brush Her Teeth With Soot, Comb The Tangles Out Of Her Unruly Red Hair, Get Dressed, And Sit Still While Her Ruff Is Sewn On And Her Sleeves Are Pinned. It’s Rough Rising And Shining Every Day–for Queens And Kids Alike.

Norman John Gillies was one of the last children ever born on St Kilda, five years before the whole population was evacuated forever to the British mainland. People had lived on these islands for over four thousand years, developing a thriving, tightly-knit society that knew nothing of crime or money, and took care of its weakest members without hesitation. At the mercy of the seasons and the elements, a unique lifestyle evolved, based around resilience, mutual trust and caring.

Amid the constant rain of German bombs and the escalating violence of World War II, British parents by the thousands chose to send their children out of the country: the wealthy, independently; the poor, through a government relocation program called CORB. In September 1940, passenger liner SS City of Benares set sail for Canada with one hundred children on board. When the war ships escorting the Benares departed, a German submarine torpedoed what became known as the Children’s Ship. Out of tragedy, ordinary people became heroes. This is their story.

At the height of World War I, as battles raged in the trenches and in the air, another struggle for survival was being waged in the most notorious POW camp in all of Germany: Holzminden. A land-locked Alcatraz of sorts, it was home to the most troublesome Allied prisoners–and the most talented at escape. The Grand Escape tells the remarkable tale of a band of pilots who pulled off an ingenious plan and made it out of enemy territory in the biggest breakout of WWI, inspiring their countrymen in the darkest hours of the war.