With over 250 species inhabiting our planet, this book explores the many different types of monkeys from the smallest Pygmy Marmoset to the largest Mandrill, and provides all the facts you wanted to know and more. Discover where monkeys come from, how they swing from tree to tree, and why they fight and play with each other.

Jewish stories set in Jerusalem, adapted from the Talmud and Midrash, Hasidic sources, and oral tradition, with origins in the Middle East, Eastern Europe, Spain, Italy, and Greece.

Meet Mr. Boffin, the wacky mad scientist who’s bringing dinosaurs back to life. Readers will never believe some of the facts he’s uncovered, such as the tallest dinosaur was 122 feet from nose to tail and the largest dinosaur teeth were the size of bananas. Illustrations.

Did you know that the oldest insect lived more than 350 million years ago? That’s more than 100 million years before the dinosaurs! Did you know that a slug has three noses, an octopus has three hearts, and that an earthworm has no eyes, no nose, no ears, and no lungs, but it has five hearts? By compiling facts that astound her and whet her own curiosity, Margriet Ruurs encourages young readers to observe the natural world around them and to share her sense of wonder and respect for it. A perfect introduction to a host of creatures, many of them endangered.

A child’s-eye view of London’s top attractions blends lively artwork with fascinating facts, and features a sweeping gatefold of the city skyline. London is calling! Come along on a mother-daughter day trip as they wend their way past the changing of the guard at Buckingham Palace, through Trafalgar Square, and on to Covent Garden. Listen closely and you might just learn a secret about the Whispering Gallery in Saint Paul’s Cathedral. Then it’s on to the Tower of London and the river Thames, where a fold-out surprise awaits. Readers will be enchanted by Salvatore Rubbino’s cheerful, sophisticated illustrations and abundant trivia about the one and only city of London.

A red-hot feast of fiery facts — the first book in Annick’s new 50 Questions seriesIf we took the time to examine flames in our world — fires that have built civilizations, sparked entire religions and literally changed the surface of the Earth — can you imagine how many questions we would have? The 50 questions in this book may be just the beginning, but they will intrigue and excite young readers.From “Who’s for dinner?” (before mastering fire, humans were more likely to be prey than predators) to “Who were the first firefighters?” (Romans over 2,000 years ago), the amazing questions and answers in this book reveal fire’s crucial role in our world.With a humorous touch (“Who was the first hairy potter?”), Tanya Lloyd Kyi presents fascinating facts alongside innovative activities for kids, like sending breath through a glass jar and playing spy games with a flashlight. Sidebars turn up the heat on the subject, while comical illustrations make for a fun and fiery visual presentation. 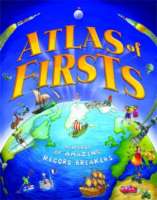 This informative book of first facts is divided into world regions. It provides a brief description of the region, and various first facts.