Two lifetimes. Two rising stars. One common danger. As a daughter starts her rise in the glamorous London fashion scene, she begins to uncover secrets and clues about the mother she never knew — a beautiful teenage model who became a victim in the high stakes, high pressure world where international fashionistas and mobsters intersect. The fast cars, flashy parties, and easy money can be so enticing. But in a world where everybody is taken at face value, there is always a high price to pay for such fleeting fame. 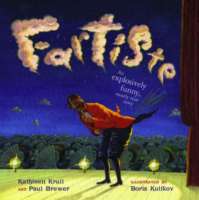 Across the world there are many an artist – But none so outrageous as Joe, the Fartiste.The Fartiste doesn’t sing, he doesn’t dance, and he doesn’t act. But that doesn’t stop him from taking the stage at Paris’s famed Moulin Rouge, where he performs his much-loved act for celebrities and royalty with the funniest talent of all. Joe is the man who has perfected the art of the fart.

Kathleen Krull and Paul Brewer bring new wind to their mostly true story about “the man who made his pants dance,” which is perfectly matched with Boris Kulikov’s explosive art.

That’s Mira M. And this is the story of her unforgettable life — as a kid alone in a junkyard tire swing, to her escape from Croatia at age 9 in a Marshall amp road case in the rear of her uncle Lou’s van. A musician, he hands her the key to her future: a guitar. When she’s 14, Mira meets Melody, Rosa and Jackson, three teens who stow away from Ghana in a ship-ping container and end up — to their surprise — in Hamburg, Germany. What stories they have! And what a story the four of them, plus Kralle (a little older and wiser) and Zucka (the record producer’s son), share on the way to the fame that all of them covet — except Mira, even after the MTV Awards show in Barcelona. Her song lyrics tell her truth. But are they her lyrics? Her music? She swears so. But who listens, now that she’s 18 — and dead?