Welcome to the astounding world of Mortal Engines! London is hunting again. Emerging from its hiding place in the hills, the great Traction City is chasing a terrified little town across the wastelands. Soon, London will feed.In the attack, Tom Natsworthy is flung from the speeding city with a murderous scar-faced girl. They must run for their lives through the wreckage–and face a terrifying new weapon that threatens the future of the world.

Katherine is almost eighteen. Severely burned when she was three, she dreams that one day she will look like everyone else. Be like everyone else. Achieve her dreams. But Katherine won’t be seen as a victim. Her life is filled with fun and humor and friendship, as she faces her first “real” date, arguments with her mum, and decisions about her future.

An extraordinary story of a journey where pain and trauma become triumph and a passion for living, “Butterflies” is a coming-of-age story that celebrates the fighter in all of us.

When ten-year-old Bel finds a photograph of her great-grandmother Beatrice, or Bisa Bea, she convinces her mother to let her borrow it. When the picture inexplicably vanishes, Bisa Bea’s voice suddenly emerges inside Bel, telling stories of the old days and counseling her on proper behavior by young girls. Then another voice emerges that tells her to be strong; this one belongs to her future granddaughter, and the key to how these voices came to live inside her lies in the lost photo of her great-grandmother. This whimsical, witty novel shows how knowledge of the past can strengthen the wisdom of future generations. 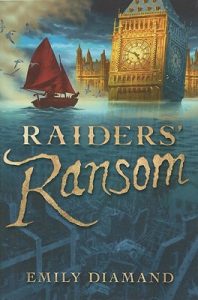 In 22nd-century Great Britain, where climate change has caused vast flooding, the piratical Reavers kidnap the Prime Minister’s daughter and thirteen-year-old Lilly Melkun, an English fisher-girl, takes her seacat on a daring rescue attempt, with a mysterious talking jewel from a past computer age tucked in her belt as ransom.

Mika lives in future London, behind The Wall, safe from The Animal Plague beyond. Or so he’s been told. But ever since Ellie vanished a year ago, he’s suspected his world may be built on secrets–and lies. When a mysterious organization starts recruiting mutant kids to compete in violent virtual reality games. Mika take the chance to search for his twin sister–and the truth.

The year is 2194, and Tendai, his brother, and his sister — the children of Zimbabwe’s chief of security — have escaped from their father’s estate to explore the dangerous city of Harare. The Ear, the Eye and the Arm was a Newbery Honor Book and received many other awards.

The House of the Scorpion By Nancy Farmer is about Matthew who is a clone of El Patrón, a powerful drug lord of the land of Opium, which is located between the United States and Mexico. For six years, he has lived in a tiny cottage in the poppy fields with Celia, a kind and deeply religious servant woman who is charged with his care and safety. He knows little about his existence until he is discovered by a group of children playing in the fields and wonders why he isn’t like them. Though Matt has been spared the fate of most clones, who have their intelligence destroyed at birth, the evil inhabitants of El Patrón’s empire consider him a “beast” and an “eejit.” When El Patrón dies at the age of 146, fourteen-year-old Matt escapes Opium with the help of Celia and Tam Lin, his devoted bodyguard who wants to right his own wrongs. After a near misadventure in his escape, Matt makes his way back home and begins to rid the country of its evils.