Bullied and despised for being human-sized, a young giant demonstrates his bravery and cleverness in a series of adventures.

The biblical tale of the young shepherd who uses a slingshot to do battle with a giant and eventually becomes a king.

A boy with a face so sad that nobody wants to look at him runs away with a caravan of giants to the city of dragons, where his sorrowful face is finally appreciated. 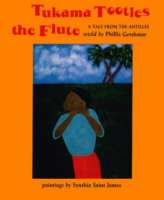 When Tukama is captured by a two-headed giant and held prisoner by the giant’s wife, he uses his flute to escape.

With magical gifts from the bull his mother had given him, the son of an Irish king manages to prove his bravery and win a princess as his wife.

In the tradition of all “once upon a time” good fairy tales, this story has an obstacle to overcome, a moral, and a happy ending. In this German tale, a “giant” sized person comes to understand that while her size may be intimidating to some, it is also of help and importance to others.

The giant Finn MacCoul is a lovable but cowardly fellow who finds himself in a peck of trouble after that nasty Scottish bully, Cucullin, tries to pick a fight. Abided by a wee bit of fairy magic, Finn’s clever wife, Oonagh, comes up with a hilarious plan: Finn will hop in the cradle and pose as his own baby. Then Cucullin will be in for a great big surprise.

A boy climbs to the top of a giant beanstalk, where he uses his quick wits to outsmart a giant and make his and his mother’s fortune. Includes lift-up flaps. 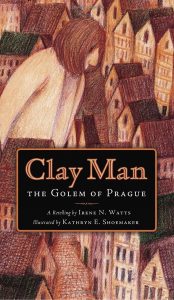 It is 1595, and the rabbi’s son Jacob is frustrated with having to live in the walled ghetto known as Jewish Town. Why can’t he venture outside of the gates and explore the beautiful city? His father warns him that Passover is a dangerous time to be a Jew and that the people from outside accuse the Jews of dreadful deeds. But one night, Jacob follows his father and two companions as they unlock the ghetto gates and proceed to the river, where they mold a human shape from the mud of the riverbank. When the rabbi speaks strange words, the shape is infused with life and the Golem of Prague is born.In this breathtaking retelling of a timeless tale, Irene N. Watts’s beautiful words are complemented by the haunting black-and-white images of artist Kathryn E. Shoemaker. 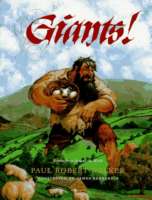 Paul Robert Walker has gathered seven giant stories from around the world, some familiar, such as “Jack and the Beanstalk” and “The Cyclops,” and others new to us and delightfully strange such as “Kana, The Stretching Wonder” from Hawaii and “Coyote and the Giant Sisters” from the Pacific Northwest.