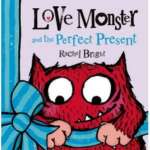 Love Monster is determined to give his best friend, a lovely girl monster, the perfect present on Gift Day, so when he discovers he cannot afford to buy anything special enough, he has an idea to make something, instead.

On Good Friday, a school holiday in Trinidad, Rajiv spends the day searching for a special birthday present for his grandmother. 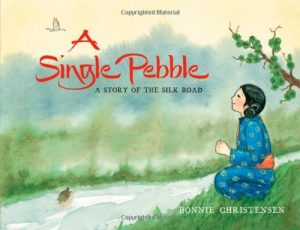 “In 9th century China, a little girl sends a small jade pebble to travel with her father along the Silk Road. The pebble passes from his hand all the way to the Republic of Venice, the end of the Silk Road, where a boy cherishes it and sees the value of this gift from a girl at the end of the road.

After harvesting an especially large “tear” of a resin known as myrrh, a young boy and his father visit a spice merchant whose three customers are seeking a special gift to bring to a baby. Includes biblical references and historical information about the Magi and myrrh.

Katrusya is devastated that her family cannot afford Christmas presents this year, but it simply wouldn’t be Christmas without a tree. She soon finds the perfect one in the deepest part of the forest and decorates it with homemade ornaments. But the next day the tree is crawling with spiders! Luckily, Katrusya convinces her mother not to throw the tree away. When the family returns from church that evening, they discover that the spiders have left a dazzling Christmas miracle.

When no one can find a pink, fluffy rabbit to give to Tallulah for her birthday, her grandmother knits her a pink, fluffy “thing” that they name Milo Armadillo, which proves to be a great present.

The Bell family’s ancestors were showered with honors, gifts and grants of land. In exchange, they have bestowed a Gift, once every 25 years, on the town. The Gifts have ranged from a statue to a bell tower with stained-glass windows, but now it is Darius’s father’s turn – and there is no money for an impressive gift. It looks as though a wheelbarrow full of vegetables is the best they can do. Darius is determined to preserve the family honor, and when an earthquake reveals something glorious, he thinks he’s found the answer.

In June of 2002, a very unusual ceremony begins in a far-flung village in western Kenya. An American diplomat is surrounded by hundreds of Maasai people. A gift is about to be bestowed on the American men, women, and children, and he is there to accept it. The gift is as unsought and unexpected as it is extraordinary.

A mere nine months have passed since the September 11 attacks, and hearts are raw. Tears flow freely from American and Maasai as these legendary warriors offer their gift to a grieving people half a world away.

Word of the gift will travel news wires around the globe. Many will be profoundly touched, but for Americans, this selfless gesture will have deeper meaning still. For a heartsick nation, the gift of fourteen cows emerges from the choking dust and darkness as a soft light of hope and friendship. 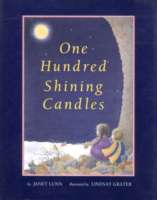 This well-loved storybook has been reissued with enhanced reproduction and many newly created illustrations just in time for a warm Christmas read under a cozy quilt by the light of a flickering fire. Ten-year-old Lucy is a pioneer girl in the Upper Canada of 1800. Her imagination fired by the schoolmaster’s stories of Christmas memories, Lucy sets about making a special Yuletide gift — something her frail mother will be able to remember and cherish forever. But even with the unwelcome help of her little brother, Dan, making one hundred handmade candles to light on Christmas night is a daunting task. Limited supplies and resources make the job that much harder, but in the end it is Lucy’s own bossiness that nearly causes a disaster. Deeply disappointed in herself, Lucy accepts the sacrifice Dan offers to make, and together the children manage to create the most wonderful of all Christmases. One Hundred Shining Candles, written by one of Canada’s best writers for children, shows readers of all ages the true joy of giving from the heart. Delicate illustrations throughout perfectly depict this gentle story set against harsh times. 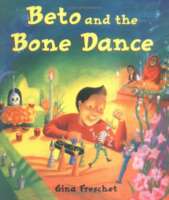 A fantastic encounter on the Day of the Dead. Today is Beto’s favorite holiday — the Day of the Dead. First, he and his father craft an altar at home in honor of Beto’s recently departed grandmother, filled with the things she loved in life. Later, it’s off to the cemetery, where at midnight all the dead souls will come to visit the living. It’s a celebratory occasion, but Beto is distraught because he isn’t able to find a perfect gift for Abuela’s altar. The answer to his dilemma is found in a wild dream, in which Beto joins a conga line of dance-mad skeletons. Through her effulgent paintings and rhythmic text, the author conveys all the excitement of this unique Mexican fiesta, as well as a comforting message for children who have lost a loved one.