Thrown from Mount Olympus as a newborn and caught by Thetis and Eurynome, who raised him on the island of Lemnos, Hephaistos had an aptitude for creating beautiful objects from a very young age. Despite his rejection from Olympus, he swallowed his anger and spent his days perfecting his craft. His exquisitely forged gifts and weapons earned him back his seat in the heavens, but he was not treated as an equal―his brothers and sisters looked down at him for his lame leg, and even his own wife, Aphrodite, was disloyal. In this installment of George O’Connor’s bestselling Olympians graphic novel series, witness Hephaistos’ wrath in God of Fire as he creates a plan that’ll win him the respect he deserves. 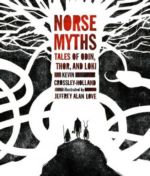 Thor’s hammer is missing again. The thunder god has a disturbing habit of misplacing his weapon–the mightiest force in the Nine Worlds. But this time the hammer isn’t just lost, it has fallen into enemy hands.

Lupe Impala, Elirio Malaria, and El Chavo Octopus are now the proud owners of their own garage–but when a series of earthquakes hit their town and Genie, their beloved cat, disappears they find themselves traveling to the realm of Mictlantecuhtli, Aztec god of the Underworld, who is keeping Genie prisoner.

Mighty Apollo is known by all as the god of the sun, but there’s more to this Olympian than a bright smile and a shining chariot. In the latest volume of Olympians, New York Times bestselling author George O’Connor continues to turn his extensive knowledge of the original Greek myths into rip-roaring graphic novel storytelling. This title has Common Core connections.

Who cut off Medusa’s head? Who was raised by a she-bear? Who tamed Pegasus? It takes a demigod to know, and Percy Jackson can fill you in on the all the daring deeds of Perseus, Atalanta, Bellerophon, and the rest of the major Greek heroes. Told in the funny, irreverent style readers have come to expect from Percy,

One day in the distant future, Thor, the Norse god of thunder, is destined to battle the giant snake that threatens to devour the world. Until then, mortals of Middle Earth look to Thor and his magic hammer for protection from evil. In this third volume of the Secrets of the Ancient Gods series, Thor takes time from his duties to lead readers through the mythological Norse realms, those mysterious worlds that are home to gods, giants, elves, and monsters. He also delves into the age of the Vikings and reveals how they lived and what they believed.

Living alone on the streets of Boston, Magnus Chase learns he is the son of a Norse god, from an uncle his mother claimed was dangerous.

The myth continues in the tenth year of the fabled Trojan War where two infamous gods of war go to battle. The spotlight is thrown on Ares, god of war, and primarily focuses on his battle with the clever and powerful Athena. As the battle culminates and the gods try to one-up each other to win, the human death toll mounts. Who will win this epic clash of power? And how many will have to die first?