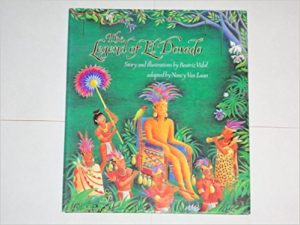 A retelling of the Chibcha Indian legend about how the treasure of El Dorado came to be.

Gracie Pearl has until sundown to find some gold to pay the rent to Mr. Bigglebottom, or he will take back the family gold mine and force her to marry him.

When leprechauns Ari, Boo, and Col need to place the pot of gold at the end of the rainbow, they cannot help getting into mischief along the way.

A loaded gun, stolen gold, and a menacing stranger. A taut frontier survivor story, set at the time of the Alaska gold rush. In an isolated cabin, fourteen-year-old Sig is alone with a corpse: his father, who has fallen through the ice and frozen to death only hours earlier. Then comes a stranger claiming that Sig’s father owes him a share of a horde of stolen gold. Sig’s only protection is a loaded Colt revolver hidden in the cabin’s storeroom. The question is, will Sig use the gun, and why?

When his seven years’ wages in gold proves too heavy to carry, Jack trades it in for one thing after another until he arrives home empty-handed but convinced he is a lucky man.

When the king charges the miller’s beautififul daughter with spinning straw into gold she makes an ill-advised deal with the cunning Rumpelstiltskin.

Like many before him, Tom, a traveling minstrel, has fallen in love at first sight with the beautiful princess Kathleen. But Kathleen has vowed only to marry the man who can win a leprechaun’s pot of gold. Tom sets out with a clever plan to fool a leprechaun into giving up his fortune. Upon meeting one of the fair folk, Tom charms him with songs and stories. As it turns out, however, Tom’s tales hold more truth than trick.

King Midas is not a cruel man, but his passion for gold surpasses all else, save his love for his daughter.If only everything he touched would turn to gold! When Midas is granted that single wish, he rejoices — until he nearly loses his beloved child to his greed.