Aneel s grandparents have come to stay, all the way from India. Aneel loves the sweet smell of his grandmother s incense, and his grandfather, Dada-ji, tells the world s best stories. When he was a boy, adventurous, energetic Dada-ji had the power of a tiger. Hunh-ji! Yes, sir! He could shake mangoes off trees and wrangle wild cobras. And what gave him his power? Fluffy-puffy hot, hot roti, with a bit of tongue-burning mango pickle. Does Dada-ji still have the power? Aneel wants to find out but first he has to figure out how to whip up a batch of hot, hot roti Overflowing with family, food, and a tall stack of fun, Hot, Hot Roti for Dada-ji is sure to warm the heart and tickle the tummy. Hunh-ji! Yes, sir! 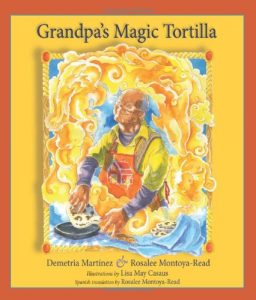 When Grandpa Luis’s grandchildren are visiting him in Chimayo, New Mexico, they see pictures of animals in one of the tortillas he has cooked for their breakfast.

When no one can find a pink, fluffy rabbit to give to Tallulah for her birthday, her grandmother knits her a pink, fluffy “thing” that they name Milo Armadillo, which proves to be a great present. 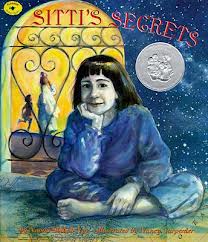 A young girl shares her ballet dancing with her dying grandmother, and the grandmother shares memories of her family’s immigration from Poland and of dancing with the girl’s grandfather.

A warm visual essay on the universal relationship between children and their grandparents features photographs from a diverse range of ethnic, cultural and socio-economic regions of the world.

The author describes Christmas at his grandmother’s apartment in Spanish Harlem the year she introduced him to the Metropolitan Museum of Art and Diego Velazquez’s portrait of Juan de Pareja, which has had a profound and lasting effect on him.

A border is nothing for people who love.””Sensitively told and true to the experience of many Mexican Americans, this bilingual picture book bridges the borders that separate all families who must live far apart from their loved ones.” -Booklist”…accompanied by innovative illustrations, originally modeled with clay. Reminiscent of Mexican folk art, they fit the story especially well, conveying its warmth and poignancy.” -Kirkus Reviews”A tender love story of a book…a kiss on the forehead at bedtime!” -Naomi Shihab Nye”A stylist in both poetry and prose, Sáenz has now taken his magic of flight to younger readers. This is his gift to them. Parents, snuggle up to your children at night and read this delightful tale of Dieguito.” -Gary Soto”La traduccíon al español es buena y el diseño del libro es atractivo.” -People en Español”The tender story in A Gift From Papá Diego / Un regalo de Papá Diego by Benjamin Alire Saenz is sprinkled with Spanish expressions throughout the English version, adding to the flavor of this bilingual tale. A glossary of the terms used is provided at the end of the book. In addition, a complete Spanish text is printed on each half page. Illustrations of wonderful clay figures painted with bright colors highlight the narrative and provide an attractive graphic border. This paperback original is a debut into the world of children’s books for Mr. Saenz, and he has succeeded in writing a poignant read-aloud book for young children – at once entertaining and comforting.”¿Barbara Bonds ThomasBenjamin Alire Sáenz was born in his grandmother¿s house in Picacho, New Mexico¿a farming village 40 miles north of the border between Mexico and the United States. Ben¿s parents spoke mostly Spanish at home and his grandparents spoke only Spanish, so Ben learned much of his English from his brothers and sisters, his friends, and by watching cartoons on television. When he was a little boy, he was a passionate reader of comic books¿Superman, Spiderman, Batman, and all the rest of the Super Heros. Ben thought it was cool that Superman could fly. Growing up, Ben discovered that he liked to write. He liked to draw and paint, too.

A grandmother from an old Maine family that came to America from England generations ago relates family and cultural life to her grandchildren as they enjoy various traditions of the New England seacoast.