Adolf Hitler’s Nazi party is gaining strength and becoming more menacing every day. Dietrich Bonhoeffer, a pastor upset by the complacency of the German church toward the suffering around it, forms a breakaway church to speak out against the established political and religious authorities. When the Nazis outlaw the church, he escapes as a fugitive. Struggling to reconcile his faith and the teachings of the Bible with the Nazi Party’s evil agenda, Bonhoeffer decides that Hitler must be stopped by any means possible!

In his signature eloquent prose, backed up by thorough research, Russell Freedman tells the story of Austrian-born Hans Scholl and his sister Sophie. They belonged to Hitler Youth as young children, but began to doubt the Nazi regime. As older students, the Scholls and a few friends formed the White Rose, a campaign of active resistance to Hitler and the Nazis. Risking imprisonment or even execution, the White Rose members distributed leaflets urging Germans to defy the Nazi government. Their belief that freedom was worth dying for will inspire young readers to stand up for what they believe in. Archival photographs and prints, source notes, bibliography, index.

In 1941 twelve-year-old Karl is proud to be a member of the Hitler Youth, but when his father is killed on the Eastern Front everything changes–his family moves to the country to live with his grandparents, he encounters a brutal Gestapo officer, and he begins to realize that his sixteen-year-old brother has joined a youth group who opposes the Nazis.

Her name was Heidi, and she was Hitler’s daughter.

It began on a rainy morning in Australia, as part of a game played by Mark and his friends. It was a storytelling game, and the four friends took turns weaving tales about fairies and mermaids and horses. But Anna’s story was different this time: It was not a fairy tale or an adventure story. The story was about a young girl who lived during World War II. Her name was Heidi, and she was Hitler’s daughter.

As Anna’s story unfolds, Mark is haunted by the image of Hitler’s daughter. He wonders what he would have done in her place if he had known his father was an evil man leading the world into a war that was destroying millions of lives. And if Mark had known, would he have had the power and determination to stop him?

This intriguing novel poses powerful questions about a frightening period in history and will force readers to examine moral issues in a fresh, compelling light.

When her German hometown becomes part of Poland after World War I, Lene, a young German Jew, struggles to come to terms with the anti-Semitism and anti-German hatred that seems to be growing around her. 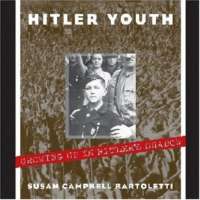 “I begin with the young. We older ones are used up . . . But my magnificent youngsters! Look at these men and boys! What material! With them, I can create a new world.” –Adolf Hitler, Nuremberg 1933 By the time Hitler became Chancellor of Germany in 1933, 3.5 million children belonged to the Hitler Youth. It would become the largest youth group in history. Susan Campbell Bartoletti explores how Hitler gained the loyalty, trust, and passion of so many of Germany’s young people. Her research includes telling interviews with surviving Hitler Youth members.

Joan BlosIt is Germany in 1932, and Hitler is rising to power. This critical place and time in modern history is poignantly re-created through the observations of a young Jewish girl named Eva, who is caught up in the sense of dread shared by the adults around her.