It is 1900, and the evil traitor, Bajamonte Tiepolo, is back, his baddened magic spreading across the globe. Now Teo and Renzo must save both Venice and London, before it is too late.

Meg and her siblings have been sent to the English countryside for the summer to stay with elderly relatives. The children are looking forward to exploring the ancient mansion and perhaps discovering a musty old attic or two filled with treasure, but never in their wildest dreams did they expect to find themselves in the middle of a fairy war. When Rowan pledges to fight for the beautiful fairy queen, Meg is desperate to save her brother. But the Midsummer War is far more than a battle between mythic creatures: Everything that lives depends on it. How can Meg choose between family and the fate of the very land itself?

A story of loyalties tested, secrets exposed, and one boy’s search for identity amid the tangled political intrigue and deception of the Dark Ages. A young thief known as “the Ghost” roams seventh-century Constantinople, tangling in political feuds and petty theft, using his eerie gifts of persuasion and stealth. With his father away at war and his mother devastated by his little sister’s death, Cai would rather be anywhere than at home. But when a rival ambushes and sells Cai as a slave, he begins to regret his choices. Aboard the slavers’ ship, Cai travels far from the warmth of Constantinople into his parents’ homeland, the forbidding land of Britain, where war is brewing between tribes. Bought by a clan head, Cai finds a new life as a tribal member, and using his uncanny talents, is put to work as a spy. The secrets he discovers, however, kindle doubt and disloyalty in his heart. Adrift in a society he still feels apart from, Cai seeks truth and revenge, throwing his life to the wind with startling results.

The Bell family’s ancestors were showered with honors, gifts and grants of land. In exchange, they have bestowed a Gift, once every 25 years, on the town. The Gifts have ranged from a statue to a bell tower with stained-glass windows, but now it is Darius’s father’s turn – and there is no money for an impressive gift. It looks as though a wheelbarrow full of vegetables is the best they can do. Darius is determined to preserve the family honor, and when an earthquake reveals something glorious, he thinks he’s found the answer. 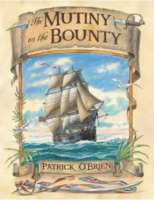 Life sailing with the Royal Navy in the 1780’s was particularly miserable: sailors slept in crowded hammocks, ate moldy cheese and maggoty bread, and were subject to very harsh discipline.  So when the HMS Bounty arrived in Tahiti after 11 months at sea, the crew of the Bounty thought it was heaven on earth. Living on the island paradise made them lazy and careless.  As the return journey began, Captain Bligh’s crew proved reluctant to leave. His temper began to flare, and his second-in-command and old friend Fletcher Christian suffered the worst of Bligh’s outbursts. His honor at stake and a longing to return to the island, Christian led a mutiny, then set Bligh and 18 loyal crew members adrift in a launch.   A daring escape by Christian and the mutineers, paired with Bligh’s amazing story of survival all make up one of history’s most rousing true maritime tales.  Patrick O’Brien’s 85 illustrations reach epic proportions of drama and realism.