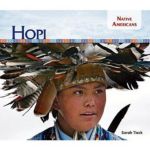 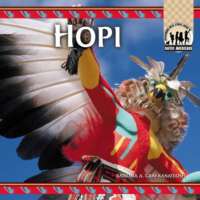 Provides a brief description of the territorial homeland of the Hopi people. The chapters describe society, homes, food, clothing, crafts, family, children, myths, war, and contact with Europeans. Readers meet Yokiuma, whose personal mission was to preserve the Hopi culture.

Tells how several animals failed in their efforts to steal fire for the Hopis, but eventually Vulture succeeded.

A mouse couple, in search of the mightiest husband for their daughter, approach the sun, the clouds, the wind, and a butte, before the unexpected victor finally appears.

Malotki & Lacapa, who previously collaborated on THE MOUSE COUPLE, bring this magical HOPI FOLKTALE to life, telling how two children left behind in the drought stricken village of Oraibi, through their creativity & playfulness, influence Muy’ingwa, the god of fertility, to return the land to fruitfulness. EKKEHART MALOTKI, professor of languages at Northern Arizona University, has spent many years working on the preservation of the Hopi language & culture. MICHAEL LACAPA has previously illustrated four children’s books, three of which he also authored. Of APACHE, HOPI & TEWA descent, he has gained inspiration from traditional storytellers & the traditional designs & patterns found in SOUTHWEST basketry & pottery. His illustrations for THE MAGIC HUMMINGBIRD convey the range of experience typical of life in the Hopi mesas, from the dullness of the parched earth to the brilliance of the multicolored corn & the magical hummingbird who delivers the children’s prayers for renewal. THE MAGIC HUMMINGBIRD $15.95 (cloth) plus $3,00 s/h. Order from Kiva Publishing, 102 E. Water St., Santa Fe, NM 87501 (505/820-7413).

Details a day in the life of an Arizona girl of Hopi descent, looking at her family, the history of her tribe, and some traditional ceremonies and customs that are still observed today.

A little mouse prepares to rid the Mishongnovi people of a hawk that has been killing their chickens.