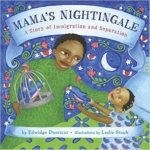 When Saya’s mother is sent to jail as an illegal immigrant, she sends her daughter a cassette tape with a song and a bedtime story, which inspires Saya to write a story of her own–one that just might bring her mother home.

Taken from her small, impoverished Chinese village and forced to sew in a New York City sweatshop, thirteen-year-old Suyin is visited by the cranes with which she has a strange connection and learns she is the daughter of the Crane Queen, who needs her help.

Fourteen-year-old Angel wakes up one morning at her desert trailer home to discover her mother has been murdered by a lowlife named Scotty, who has vanished. Angel has no water, no weapon, but she knows that Scotty, an expert tracker and hunter, will surface soon in order to eliminate her as a witness. She has to run, to disappear, if she is to survive and tell the world what happened. Her flight takes her through a harsh landscape to places she never expected to be, forcing her to trust others for the first time and strengthening her in ways she doesn’t even anticipate . . . until it’s time to take a stand.

After eleven-year-old Zitlally’s father is deported to Mexico, she takes refuge in her trailer park’s forest of rusted car parts, where she befriends a spunky neighbor and finds a stray dog that she nurses back to health and believes she must keep safe so.

Compares the lives of two fourteen-year-olds–an illegal immigrant who sells herself on the streets and a suburban princess obsessed with becoming head cheerleader–both trapped in worlds where beauty and youth are pricey commodities. 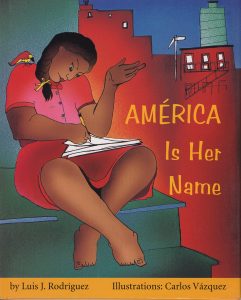 Set in the Pilsen barrio of Chicago, this children’s picture book gives a heartwarming message of hope. The heroine, Amrica, is a primary school student who is unhappy in school until a poet visits the class and inspires the students to express themselves creatively-in Spanish or English. Amrica Is Her Name emphasizes the power of individual creativity in overcoming a difficult environment and establishing self-worth and identity through the young girl Amrica’s desire and determination to be a writer. This story deals realistically with the problems in urban neighborhoods and has an upbeat theme: you can succeed in spite of the odds against you. Carlos Vzquez’s inspired four-color illustrations give a vivid sense of the barrio, as well as the beauty and strength of the young girl Amrica.Luis J. Rodrguez grew up in Watts and East L.A. His bestselling memoir about gang life, Always Running (now available in paperback in both English and Spanish from Touchstone Books), won the Carl Sandburg Award. His Poems Across the Pavement (Ta Chucha Press) won the Poetry Center Book Award from San Francisco State University, and his poetry collection, The Concrete River was awarded the 1991 PEN Oakland/Josephine Miles Award for Poetry. Mr. Rodrguez has worked extensively with gang members to guide them in positive directions, and he is frequently featured as a keynote speaker or guest poet at national conferences and cultural centers. Rodrguez explores the Chicano experience with an unrelenting, socially conscious eye that moved Larry Weintraub of the Chicago Sun-Times to call him a poet “we need to hear.”Illustrator Carlos Vzquez was born in Mexico, studied physics and art, and now teaches in adult education programs in New York City.This book is also available in a Spanish language edition as La llaman Amrica translated by Tino Villanueva. 1-880684-41-1

“‘La frontera’…I heard it for the first time back in the late 1940s when Papa and Mama told me and Roberto, my older brother, that someday we would take a long trip north, cross la frontera, enter California, and leave our poverty behind.” So begins this honest and powerful account of a family’s journey to the fields of California — to a life of constant moving, from strawberry fields to cotton fields, from tent cities to one-room shacks, from picking grapes to topping carrots and thinning lettuce. Seen through the eyes of a boy who longs for an education and the right to call one palce home, this is a story of survival, faith, and hope. It is a journey that will open readers’ hearts and minds.