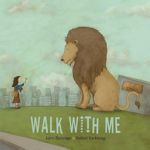 A deceptively simple, imaginative story depicting the complex emotional reality of a girl whose father no longer lives at home. The girl conjures up an imaginary companion, a lion, who will come with her on the long walk home from school. He will help her to pick up her baby brother from daycare and shop at the store (which has cut off the family’s credit), and he’ll keep her company all along the way until she is safe at home.

Martin Moone is eleven and completely fed up with being the only boy in a family of girls. He’s desperate for a decent wingman to help him navigate his idiotic life. So when best mate Padraic suggests Martin get an imaginary friend―or “IF” for short―he decides to give it a go.

Tilly has an exhausting day when an enormous white bear, which no-one else can see, comes to live with her.

When Matthew moves to Vancouver with his mother, he’s not able to bring along his dog Lucky, because the apartment building he is moving into does not allow dogs. But when Matthew’s imaginary dog scares off a burglar, all the tenants argue that Lucky should be allowed to come live there.

Jean longs to play the banjo, but the Django keeps on messing things up! So Jean sends the Django away, but wonders if he has lost his most precious inspiration.In this fictional story inspired by the famous jazz musician Jean “Django” Reinhardt, a young boy named Jean meets a special character called the Django. He’s fun and exciting, but he always gets Jean into trouble. Eventually the Django has to be sent away, and Jean misses him very much, until he discovers that he can still feel close to the Django every time he picks up his banjo.

A little boy gets busy too playing with his imaginary elephant friend when his grandparents have too many things to do to spend time with him.

Best friends Jamie and his toy Highland bull Angus tackle a lively playmate, become muddled by a pretend game, and discover that playing is not fun unless they are doing it together.