Chronicles the childhood of EdNah New Rider Weber as she is moved from her Pawnee home to live with her father on a Navajo reservation and then is again uprooted and placed in the Phoenix Indian School. 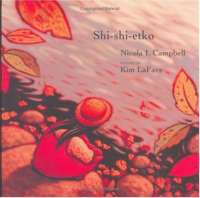 Forced to use only people’s English names and not speak to his siblings at school, Shin-chi holds fast to the canoe given to him by his father, hopeful that things will then improve for his family and the tribe he loves.

In alternating passages, two Mohawk sisters describe their lives at the Carlisle Indian Industrial School, established in 1879 to educate Native Americans, as they try to assimilate into white culture and one of them is falsely accused of stealing.