A family, separated by duty and distance, waits for a loved one to return home in this lyrical picture book celebrating the bonds of a Cherokee family and the bravery of history-making women pilots.

What creatures lurk beneath the sea ice? Putuguq and Kublu – two siblings who can’t seem to get along- are about to find out! On their way to the shoreline, Putuguq and Kublu run into their grandfather, who has a stern warning for the pair: always beware when playing on the shore, because you never know if a qalupalik, a mythical creature that snatches children, is lying in wait under the ice. Kublu is pretty sure their grandfather is just trying to spook them with a scary story from the past….but maybe not? 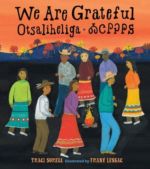 The word otsaliheliga (oh-jah-LEE-hay-lee-gah) is used by members of the Cherokee Nation to express gratitude. Beginning in the fall with the new year and ending in summer, follow a full Cherokee year of celebrations and experiences. Written by a citizen of the Cherokee Nation, this look at one group of Native Americans is appended with a glossary and the complete Cherokee syllabary, originally created by Sequoyah.

Celebrating the stories of Indigenous people throughout time, Wab Kinew has created a powerful rap song, the lyrics of which are the basis for the text in this beautiful picture book, illustrated by the acclaimed Joe Morse. Including figures such as Crazy Horse, Net-no-kwa, former NASA astronaut John Herrington and Canadian NHL goalie Carey Price, Go Show the World showcases a diverse group of Indigenous people in the US and Canada, both the more well known and the not- so-widely recognized. Individually, their stories, though briefly touched on, are inspiring; collectively, they empower the reader with this message: “We are people who matter, yes, it’s true; now let’s show the world what people who matter can do.

When Louise Wolfe’s boyfriend mocks and disrespects Native people in front of her, she breaks things off and dumps him over e-mail. She’d rather spend her senior year with her family and friends and working on the school newspaper. The editors pair her up with Joey Kairouz, an ambitious new photojournalist, and in no time the paper’s staff find themselves with a major story to cover: the school musical director’s inclusive approach to casting The Wizard of Oz has been provoking backlash in their mostly white, middle-class Kansas town. As tensions mount at school, so does a romance between Lou and Joey. But ‘dating while Native’ can be difficult. In trying to protect her own heart, will Lou break Joey’s? — adapted from jacket.

In 1980 life is hard on the Tuscarora Reservation in upstate New York, and some of the teenagers feel they have fewer options than they’d like: Carson Mastick dreams of forming a rock band, and Maggi Bokoni longs to create her own conceptual artwork instead of the traditional beadwork that her family sells to tourists–but tensions are rising between the reservation and the surrounding communities, and somehow in the confusion of politics and growing up Carson and Maggi have to make a place for themselves.

Two tales, set in a time when animals and human beings still talked to each other, display Thomas King s cheeky humor and master storytelling skills. Freshly illustrated and reissued as an early chapter book, these stories are perfect for newly independent readers.

In the early 1600s, imagines an encounter between a Pueblo woman and Sister María de Jesús de Ágreda, New Mexicoʹs famous Lady in Blue, during the nun’s mystical spiritual journeys.

The sun on your face. The smell of warm bannock baking in the oven. Holding the hand of someone you love. What fills your heart with happiness? This beautiful board book, with illustrations from celebrated artist Julie Flett, serves as a reminder for little ones and adults alike to reflect on and cherish the moments in life that bring us joy.