For an entire school year, Oscar the ant and Bill the octopus send letters to each other as part of a school project. Oscar loves table tennis, and Bill loves modelling clay. Oscar does judo, while Bill has a garden. Despite their differences, the two new friends find shared interests… all leading up to one final surprise!

A small insect learns that even though she can walk on the ceiling and fly superfast, there are dangers lurking everywhere. 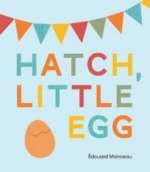 The little bird is hatching! Everyone is rushing to see the main event. This is not to be missed — everyone’s buzzing about it! With cameras in tow, various animals hop into cars, motorcycles, wagon trailers — anything that will get them there in time to see the event unfold. Finally, with the crowd gathered ‘round, a crack appears in the eggshell and out comes . . . well, it’s not quite what they expected.

One in a series of humorous books about disgusting creatures, The Slug is a look at the land slug. It covers such topics as the slug’s two pairs of tentacles, one pair for seeing, one pair for smelling (it can see you’re a kid and smell like broccoli), its breathing hole (on the side of its head!), and its pretty gross mucous covering (in order to find a partner, the slug can follow another slug’s mucous trail. True love!). Although silly and off-the-wall, The Slug contains real information that will tie in with curriculum.

The first in a series of humorous books about disgusting creatures, The Fly is a look at the common housefly. It covers such topics as the hair on the fly’s body (requires a lot of shaving), its ability to walk on the ceiling (it’s pretty cool, but it’s hard to play soccer up there), and its really disgusting food tastes (garbage juice soup followed by dirty diaper with rotten tomato sauce, for example). Although silly and off-the-wall, The Fly contains real information that will tie in with curriculum.

When the students at Mortingham Boarding Academy find a group of strange, silvery beetles on school grounds they are excited, but when the beetles attack them and a mysterious virus starts spreading, a group of mismatched students must work together to survive.

When Stephen spots a beetle he takes off his shoe and raises his arm, ready to strike… but then he has second thoughts. He lays his head down on the ground and the beetle walks right up to him. At the last moment the beetle turns aside and each can go on with the day, having avoided the worst.In this very simple story Jorge Luján presents the kind of deep moral questions that can occur even in the smallest child’s day. Chiara Carrer’s very original etched and painted illustrations perfectly complement the story, and are in and of themselves beautiful works of art.

An anthology of short poems about insects and other small animals by authors from around the world.

Four generations of Chinese and Chinese-American girls, beginning in 1835, are tied together by the tradition of raising silkworms and the legacy of the legendary Weaving Maid.