The true story of Joseph-Armand Bombardier’s journey to invent the snowmobile.

Mac and his reluctant friend Paul head from Australia to Manhattan to continue their work for the Coolhunter website, and once there they discover a group of young inventors whose work is meant to be kept top-secret.

The ingenuity of African peoples from ancient times to today. Did you know that aloe vera — now found in countless products, including sunscreens and soaps — was first used by Africans? They ground it into powder and used it to treat burns and other skin conditions, and hunters used it to disguise their scent from animals. They also used the nutritious oil from the fruit of the oil palm tree in everything from cooking to medicines to wine. And the marimba, better known to us as the xylophone, is believed to have originated 700 years ago in Mali. Other unique African innovations include the technique of banana leaf art and using horns — and hairdos! — to communicate important messages. Africans Thought of It features descriptive photos and information-packed text that is divided into sections, including: Agriculture Food Medicine Music Architecture Games and Sports. This fourth book in Annick’s We Thought of It series takes readers on a fascinating journey across the world’s second largest continent to discover how aspects of its culture have spread around the globe. 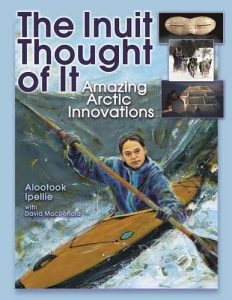 Dazzling inventions from the far north.Today’s Arctic communities have all the comforts of modern living. Yet the Inuit survived in this harsh landscape for hundreds of years with nothing but the land and their own ingenuity. Join authors Alootook Ipellie and David MacDonald as they explore the amazing innovations of traditional Inuit and how their ideas continue to echo around the world.Some inventions are still familiar to us: the one-person watercraft known as a kayak retains its Inuit name. Other innovations have been replaced by modern technology: slitted snow goggles protected Inuit eyes long before sunglasses arrived on the scene. And other ideas were surprisingly inspired: using human-shaped stone stacks (lnunnguat) to trick and trap caribou.Many more Inuit innovations are explored here, including: Dog sleds Kids’ stuff Shelter Food preservation Clothing Medicine.In all, more than 40 Inuit items and ideas are showcased through dramatic photos and captivating language. From how these objects were made, to their impact on contemporary culture, The Inuit Thought of It is a remarkable catalog of Inuit invention. 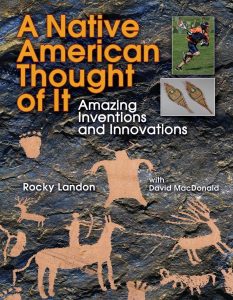 Inventiveness and ingenuity from North America’s First Nations.Everyone knows that moccasins, canoes and toboggans were invented by the Aboriginal people of North America, but did you know that they also developed their own sign language, as well as syringe needles and a secret ingredient in soda pop?Depending on where they lived, Aboriginal communities relied on their ingenuity to harness the resources available to them. Some groups, such as the Iroquois, were particularly skilled at growing and harvesting food. From them, we get corn and wild rice, as well as maple syrup.Other groups, including the Sioux and Comanche of the plains, were exceptional hunters. Camouflage, fish hooks and decoys were all developed to make the task of catching animals easier. And even games-lacrosse, hockey and volleyball — have Native American roots.Other clever inventions and innovations include: Diapers Asphalt Megaphones Hair conditioner Surgical knives Sunscreen.With descriptive photos and information-packed text, this book explores eight different categories in which the creativity of First Nations peoples from across the continent led to remarkable inventions and innovations, many of which are still in use today.

Tiny dynamo Nilly and his friend Lisa, first introduced in Doctor Proctor’s Fart Powder (S and S, 2010), return to save the day (and the doctor). At the end of their last outing, Doctor P. headed back to Paris to save the love of his life, Juliette Margarine, from having to marry evil Claude Cliché. A mysterious postcard from the past sends Nilly and Lisa on a mission to rescue him, both helped and hindered by the doctor’s crazy inventions, including a time-traveling bathtub and translating nose plugs. A whirlwind tour of French history ensues, including stops at the Moulin Rouge, the Tour de France, Waterloo, the Bastille, Monsieur Eiffel’s workroom, and Joan of Arc’s jail cell, with our heroes changing history right and left. Chasing them through time is Raspa, Proctor’s one-legged former assistant, inventor of time-travel soap, who makes the ultimate sacrifice to atone for past misdeeds.

Jacques Cousteau was the world’s ambassador of the oceans. His popular TV series brought whales, otters, and dolphins right into people’s living rooms. Now, in this exciting picturebook biography, Dan Yaccarino introduces young readers to the man behind the snorkel. From the first moment he got a glimpse of what lived under the ocean’s waves, Cousteau was hooked. And so he set sail aboard the Calypso to see the sea. He and his team of scientists invented diving equipment and waterproof cameras. They made films and televisions shows and wrote books so they could share what they learned. The oceans were a vast unexplored world, and Cousteau became our guide. And when he saw that pollution was taking its toll on the seas, Cousteau became our guide in how to protect the oceans as well.

How Chinese ingenuity changed the world. Acupuncture, gunpowder and the secrets to spinning silk are innovations that we have come to associate with China. But did you know that the Chinese also invented the umbrella? And toilet paper, initially made from rice straw clumped together, was first used in China! Through the ages, the Chinese have used the resources available to them to improve their lives. Their development of the compass and the paddleboat helped facilitate the often difficult tasks of travel and trade, and many foods associated with health and wellness — from green tea to tofu — have their origins in China. Other interesting innovations include: the suspension bridge and the wheelbarrow playing cards. With descriptive photos and information-packed text divided into sections including farming, food and games, this third book in the “We Thought of It” series explores the fascinating origins of much that surrounds us today.

In a land of never-ending snow, Rufus Breeze and his mother must protect the family home from being seized by tyrant Bartholomew Tullock. His sister Madeline and her father, an inventor of fans that are now useless, join forces with a ne’er-do-well adventurer and his blue-haired terrier, hoping to make some money.