When the Nazis invade Czechoslovakia in 1941, twelve-year-old Michael and his family are deported from Prague to the Terezin concentration camp, where his mother’s will and ingenuity keep them from being transported to Auschwitz and certain death.

Lisa and her family have a large cabin in first class, while Sol and his parents are below in tourist class.  They don’t know each other, but they share a mix of feelings: excitement to be crossing the ocean, hope for the future, and sadness at leaving everything they know behind. 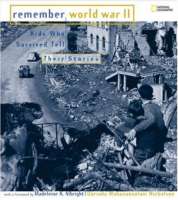 Remember World War II: Kids Who Survived Tell Their Stories is told from three different perspectives: the war in Europe, in the Pacific, and the U.S.