In 1898, just after his Bar Mitzvah, thirteen-year-old Elan and his family travel to Albuquerque, New Mexico, where he meets his mother’s family and participates in the Pueblo ceremony of becoming a man.

Startling first-person narratives, rare photographs, and a well-researched history describe what happened at Auschwitz, a concentration camp in Poland used during World War II by the Nazis to gather and murder many people, mostly Jews. 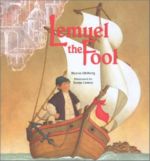 After journeying around the world in search of the magical city of his dreams, Lemuel discovers there’s no place like home.

Adam and Thomas, two nine-year-old Jewish boys who survive World War II, take refuge in the forest where they learn to forage and survive, soon meeting and helping other fugitives fleeing for their lives.

As a young adult in wartime Vienna, Georg Rauch helped his mother hide dozens of Jews from the Gestapo behind false walls in their top-floor apartment and arrange for their safe transport out of the country. His family was among the few who worked underground to resist Nazi rule. Then came the day he was drafted into Hitler’s army and shipped out to fight on the Eastern front as part of the German infantry—in spite of his having confessed his own Jewish ancestry.

Leon Leyson (born Leib Lezjon) was only ten years old when the Nazis invaded Poland and his family was forced to relocate to the Krakow ghetto. With incredible luck, perseverance and grit, Leyson was able to survive the sadism of the Nazis, including that of the demonic Amon Goeth, commandant of Plaszow, the concentration camp outside Krakow. Ultimately, it was the generosity and cunning of one man, a man named Oskar Schindler, who saved Leon Leyson’s life, and the lives of his mother, his father, and two of his four siblings, by adding their names to his list of workers in his factory – a list that became world renowned: Schindler’s List. This, the only memoir published by a former Schindler’s List child, perfectly captures the innocence of a small boy who goes through the unthinkable. Most notable is the lack of rancour, the lack of venom, and the abundance of dignity in Mr Leyson’s telling. The Boy on the Wooden Box is a legacy of hope, a memoir unlike anything you’ve ever read.

The future is often foretold in stories of the past. As families flee the Debaltseve in Eastern Ukraine in 2015, Ken Goodman’s The Smart One: A Grandfather’s Tale takes us back to families fleeing persecution in Eastern Europe at the turn of the Twentieth Century. It is a compelling story of Jewish migration to America, which begins in Smorgon, now in Belarus, a former Soviet Republic, but at the time Smorgon was in Vilnius, a district of Lithuania, and a part of the Russian Empire.

A young Jewish boy is given a star to wear. At first he is proud of the decoration, but soon finds the star overshadowing him no one sees the boy, only the star. Lonely, frightened, and helpless, he watches as other star-wearers are led away into the night. This affecting allegory, rich with symbolism, educates children about the events of the Holocaust in a way that young minds can easily grasp.

November 1940. A circus parade walks through the streets of Warsaw, waving a flag and singing. They are 160 Jewish children, forced by the Nazis to leave their beloved orphanage. It’s a sad occasion, but led by Doctor Korczak, their inspirational director, the children are defiantly joyful. Their new home is in the ghetto, a prison for Jews. Day by day, more people arrive. Some are forced to live on the street and freeze to death. Others die of disease and starvation. Though they lack food, warmth, and freedom, the children’s spirits are sustained by the steadfast respect and kindness of “Mister” Doctor. But these children will never grow up: in August 1942, they board the train that will carry them away to the death camps. Offered his freedom, Doctor Korczak refuses to abandon the children and proudly joins them on their last journey.