Many years ago, the storytellers say, the great King Arthur brought justice to England with the help of his gallant knights of the roundtable.  While most of King Arthur’s knights freely chose a life of duty, for Sir Balin the Ill-Fated, destiny was foretold in a prophecy. And seriously, “ill-fated” is right there in his title, so Balin’s not surprised when things go sour. Still, no matter how dire the task, a loyal and gallant knight never refuses adventure!  Will Sir Balin finally discover his true destiny? And which ill-fated path will he have to choose? Join Balin on this, the noblest quest of all. With black-and-white drawings from acclaimed artist Aaron Renier throughout.

Fourteen-year-old orphan Henry Grim’s schooling at the prestigious Knightley Academy continues, as he and some friends discover an old classroom filled with forgotten weapons which lead them into a dangerous adventure.

Sir Dinadan and his friend Sir Palomides, Sir Gaheris, Sir Terence, and other knights of the Round Table and their associates try to stop Mordred and his White Horsemen from ending King Arthur’s rule of Great Britain. 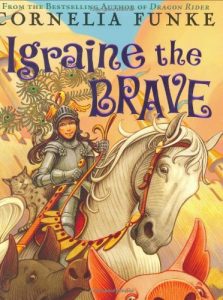 Princess Igraine dreams of becoming a famous knight just like her great grandfather, but the truth is, life at the family castle is rather boring. Until the nephew of the baroness-next-door shows up. He’s got a dastardly plan to capture the castle and claim as his own the wonderful singing spell books that belong to Igraine’s magician parents. To make matters worse, at the very moment of the siege, her mom and dad botch a spell, turning themselves into pigs! Aided by a Gentle Giant and a Sorrowful Knight, it’s up to Igraine to be brave and save the day–and the books!

A retelling of the events that culminated in Arthur’s ascent to the throne depicts his dramatic removal of Uther’s sword from the stone and is accompanied by illustrations made to look like stained glass. Children’s BOMC Alt. 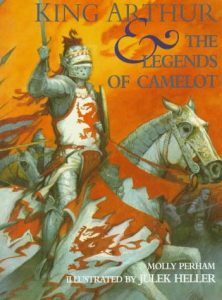 A dramatic retelling of the classic legend of King Arthur and his knights of the Round Table captures all of the majesty of the mystical quest for the Holy Grail. All ages.

Can a knight sacrifice everything he holds sacred in service to his king? King Richard is being held for ransom in Germany, and England is in chaos without a sovereign. The de Granvilles must deliver the treasure that will win their King’s freedom.

But the Old Man of the Mountain, leader of the Assassins, is ready to take his revenge on Kamil. To do so he will orchestrate a great betrayal, and his tentacles of treachery reach far and deep. Kamil is determined to prevail—the Old Man must not win.

The fate of a king, the bonds of a friendship, and the depth of an enduring love will all be in jeopardy as Will, Ellie, Kamil, and Hosanna face the ultimate loyalty test, and their final battle.

Having returned to a politically unstable England after the Crusades, brothers Will and Gavin–with the help of the red horse Hosanna–attempt to rescue their friend Ellie who is being held prisoner by an enemy of King Richard I.