The Hero Twins tells the story of two brothers born to Changing Woman and trained by the Holy People to save their people from the naayéé’, a race of monsters. But the naayéé’ can’t be beaten alone. Family and friends and wise mentors must lead any warrior down the good path toward victory. 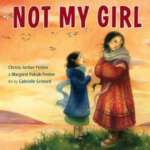 Two years ago, Margaret left her Arctic home for the outsiders’ school. Now she has returned and can barely contain her excitement as she rushes towards her waiting family — but her mother stands still as a stone. This strange, skinny child, with her hair cropped short, can’t be her daughter. “Not my girl!” she says angrily.

This guide to language takes readers on a trip of the tongue, exploring how languages — spoken, written and sign — originate and change over time.

At the animal shelter, a young boy and his family choose a pet, Norman, the little stray dog who has been there the longest. Norman is brown and white, with a stump of a tail. He’s so glad to have a home that he does a “hula dance of happiness” whenever he sees his new owners. But the family soon discovers that Norman won’t respond to commands. He doesn’t even seem to know his own name. They conclude that lovable Norman just isn’t very smart until a chance encounter in the park makes them think otherwise. 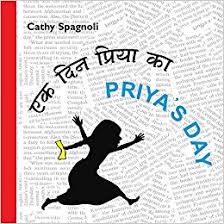 Priya’s day is a cheerful story of Priya’s busy, busy day – how she wakes up early in the morning, rolls up her mat, helps her mother and then sets off into the hills chasing butterflies… This activity book also shows how to tell the story in a more exciting way, while folding a sheet of newspaper into interesting shapes from the story.

This collection includes works by world-renowned poets, among them Lorca, Goethe, Whitman, and Shelley. Each poem appears first in Spanish, and then in its original language, if the poem was translated. For instance, Emily Dickinson’s selection appears in Spanish and English, while Wang Wei’s appears in Spanish and Chinese. The book opens with an excerpt from Christina Rossetti’s Is the Moon Tired? in which the orb is personified as a tired, hardworking woman. Its Spanish translation actually sounds more musical than the original English. The hauntingly beautiful full-page digital paintings have an ethereal quality that transports readers into the lyrical poetry. The Moon appears in each illustration, sometimes as a crescent, sometimes full, and sometimes as a woman’s face. This oversize treasury will be perfect for a world-poetry unit, a lesson on the art of translation, or special poetry programs at schools and libraries.–Rebecca Hickman, Sherman Library at NSU, Fort Lauderdale, FL

John’s mother is geting married and he has to leave the reservation. John’s grandfather tells him he has the special unbreakable code to take with him. This story portrays the quiet pride of a Navajo code talker as he explains to his grandson how the Navajo language, faith and ingenuity helped win World War II.

Dzanibaa’ is alone when U.S. troops swoop down on her family’s hogan. Before she can run to safety, a soldier grabs her and puts her on his horse. She is taken to Fort Canby, and from there is forced to walk to Bosque Redondo. For four long years, Dzanibaa’ and her family endure incredible hardship and sacrifice. Crops wither. Food is scarce or so tainted that it poisons. Illness strikes. At times there seems no hope of a better future. Nevertheless, this time of trial gives Dzanibaa’ a profound sense of herself as a Navajo and of the importance of her culture. As never before, Dzanibaa’ realizes the significance of the clan system, of the prayers and songs of her people, and of exerting herself to help her family. Hear Dzanibaa”s story, and discover why she is the Little Woman Warrior Who Came Home.

Many girls are named after flowers (or even forms of the word “flower,” such as Flora). Girls’ names in different languages accompany her imaginative illustrations of flowers, so that the reader discovers, for example, that Gul means rose in Turkish, but that it is Rosa in Spanish and Rodanthe in Greek. Flowers named in the book include rose, heather, buttercup, sunflower, lily of the valley, daisy, bluebell, snowdrop, hyacinth, myrtle, camomile, cherry blossom, jasmine, violet, tulip, poppy. This can be used in the classroom to talk about culture, language and botany.