When mythical creatures appear, a mystery of unparalleled proportions begins to unfold for Timothy, his sister Sarah, and school bully Jessica, who must defeat the powers of the Darkness.

Presents instructions for speaking thirteen secret languages, including Pig Latin, one of the best known and easiest codes to learn, and Boontling, developed by people in a California town.

This guide to language takes readers on a trip of the tongue, exploring how languages — spoken, written and sign — originate and change over time.

Learning—and using—Yiddish is fun for the whole family, from the youngest mamaleh to the oldest bubbe and zaideh. Introduced to America as the mother tongue of millions of Jewish immigrants, Yiddish has made its way into everyday English. The sprightly, rhyming text follows a toddler through a busy day and is peppered from beginning to end with Yiddish words. Oy!—will everybody kvell when they hear their little ones spouting words from this most expressive of languages.

A border is nothing for people who love.””Sensitively told and true to the experience of many Mexican Americans, this bilingual picture book bridges the borders that separate all families who must live far apart from their loved ones.” -Booklist”…accompanied by innovative illustrations, originally modeled with clay. Reminiscent of Mexican folk art, they fit the story especially well, conveying its warmth and poignancy.” -Kirkus Reviews”A tender love story of a book…a kiss on the forehead at bedtime!” -Naomi Shihab Nye”A stylist in both poetry and prose, Sáenz has now taken his magic of flight to younger readers. This is his gift to them. Parents, snuggle up to your children at night and read this delightful tale of Dieguito.” -Gary Soto”La traduccíon al español es buena y el diseño del libro es atractivo.” -People en Español”The tender story in A Gift From Papá Diego / Un regalo de Papá Diego by Benjamin Alire Saenz is sprinkled with Spanish expressions throughout the English version, adding to the flavor of this bilingual tale. A glossary of the terms used is provided at the end of the book. In addition, a complete Spanish text is printed on each half page. Illustrations of wonderful clay figures painted with bright colors highlight the narrative and provide an attractive graphic border. This paperback original is a debut into the world of children’s books for Mr. Saenz, and he has succeeded in writing a poignant read-aloud book for young children – at once entertaining and comforting.”¿Barbara Bonds ThomasBenjamin Alire Sáenz was born in his grandmother¿s house in Picacho, New Mexico¿a farming village 40 miles north of the border between Mexico and the United States. Ben¿s parents spoke mostly Spanish at home and his grandparents spoke only Spanish, so Ben learned much of his English from his brothers and sisters, his friends, and by watching cartoons on television. When he was a little boy, he was a passionate reader of comic books¿Superman, Spiderman, Batman, and all the rest of the Super Heros. Ben thought it was cool that Superman could fly. Growing up, Ben discovered that he liked to write. He liked to draw and paint, too. 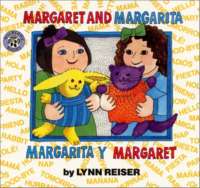 Margaret and MargaritaMargarita Y MargaretMargaret speaks English but not Spanish. Margarita speaks Spanish but not English. Can they still play? Of course they can! Join two robust girls who aren’t about to let anything spoil their fun. 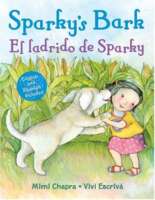 When Lucy comes to the United States for the first time, no one can understand her English, not even Sparky. How will Sparky help her? Cuando Lucy viene a los Estados Unidos por primera vez, nadie puede entender su inglés, ni siquiera Sparky. ¿Cómo la ayudará Sparky?

Russian, Japanese, Swahili, Spanish… how does each language sound? What are the people of each culture like? Children can find out with this brightly illustrated introduction to foreign lands. “Along with the pleasure of adventure is the recognition of community with kids everywhere.” -Booklist 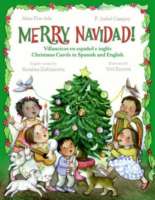 Resuenen con alegría los cánticos de mi tierra que viva el Niño Jesús que ha nacido en Nochebuena. It’s time to sing out with joy the songs that are sung in my land in praise of the precious Child born this holy Christmas evening. Come share the joy of a Hispanic Christmas! In this warm and vibrant collection of traditional Spanish Christmas carols, or villancicos, noted authors Alma Flor Ada and F. Isabel Campoy bring to life the holiday traditions of Latin America and Spain. The creative English adaptations by Rosalma Zubizarreta both capture the spirit of the originals and add a new dimension to the songs. And Spanish illustrator Viví Escrivá’s spirited illustrations are perfect backdrops for the lyrics, adding rich holiday flavor. Come sing along! ¡Feliz Navidad! and Merry Christmas!