Follows Dita Kraus from age fourteen, when she is put in charge of a few forbidden books at Auschwitz concentration camp, through the end of World War II and beyond. Based on a true story.

The inspiring story of an Iraqi librarian’s courageous fight to save books from the Basra Central Library before it was destroyed in the war.It is 2003 and Alia Muhammad Baker, the chief librarian of the Central Library in Basra, Iraq, has grown worried given the increased likelihood of war in her country. Determined to preserve the irreplacable records of the culture and history of the land on which she lives from the destruction of the war, Alia undertakes a courageous and extremely dangerous task of spiriting away 30,000 books from the library to a safe place.Told in dramatic graphic-novel panels by acclaimed cartoonist Mark Alan Stamaty, Alia’s Mission celebrates the importance of books and the freedom to read, while examining the impact of war on a country and its people.From the Hardcover edition. 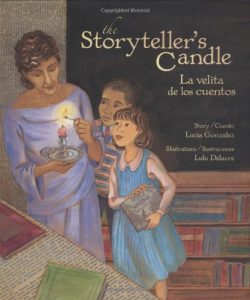 It is the winter of 1929, and cousins Hildamar and Santiago have just moved to enormous, chilly New York from their native Puerto Rico. As Three Kings’ Day approaches, Hildamar and Santiago mourn the loss of their sunny home and wonder about their future in their adopted city. But when a storyteller and librarian named Pura Belpré arrives in their classroom, the children begin to understand just what a library can mean to a community. In this fitting tribute to a remarkable woman, Lucía González and Lulu Delacre have captured the truly astounding effect that Belpré had on the city of New York.

Every kid in town knows about Spud Murphy. Grown-ups think she’s the kindly old librarian, but kids know the truth. They’ve heard all about the gas-powered spud gun she keeps hidden under her desk-make so much as a sound in her library and you could get spudded with soggy potatoes. Laugh out loud and you may never be seen again . . . And now, in a major coup of parental injustice, Will and his older brother, Marty, have been ordered to spend their summer vacation in Spud’s library! Will brothers Will and Marty survive a summer marooned on the carpet of Spud’s children’s section, under the watchful eye of this terrifying librarian? Or will they discover a new interest that surprises even them?

Fleeing from his brutal father, fourteen-year-old Burl arrives at the remote cabin of an eccentric genius who in just one day changes the young man’s life forever.